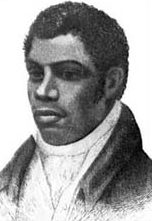 Graham Ogilvy looks at the life of the radical William Davidson.

The release last week of Mike Leigh’s new film Peterloo telling the story of the notorious 1819 massacre of supporters of parliamentary reform in Manchester brings to mind the intriguing story of William Davidson, a Jamaican-born black Scot who began his legal career by studying law in Glasgow and ended it by making an eloquent but unsuccessful speech from the dock seeking to avoid execution for his role in the Cato Street Conspiracy of 1820. Davidson and his four co-conspirators, in a half-baked plot to assassinate the Home Secretary encouraged by a government agent provocateur, would become the last people in England to be decapitated after being hanged.

Davidson was born the illegitimate son of the Scottish Attorney General of Jamaica and a local black woman in 1781. At the age of 14, against his mother’s wishes it is said, he was sent to Glasgow to study law. His time in Scotland coincided with the democratic ferment that followed the French Revolution when, as Lord Cockburn noted: “Everything, not this or that thing, but literally everything, was soaked in this one event.”

Agitation for reform was intense in Scotland and would ultimately lead to the infamous trials for sedition and the conviction and transportation of the advocate Thomas Muir of Huntershill. It was no surprise then that it was during his time north of the border that Davidson first he became interested in radical politics. During the repression that followed the trials for sedition, Davidson moved to Liverpool and served three years of an apprenticeship before he was press-ganged into the Royal Navy.

After his discharge, he returned to Scotland and his father arranged for him to study mathematics at Aberdeen. But Davidson withdrew from study, moved to Birmingham, and started a cabinet-making business with a legacy from his mother. The failure of this business prompted Davidson to move to London.

In London, Davidson married Sarah Lane, a working-class widow with four children and had had two more children with her. He became a Wesleyan Methodist and was incensed by the Peterloo massacre. He returned to radical politics and joined the Marylebone Union Reading Society, a club that offered a reading room of radical newspapers such as the Republican and the Manchester Observer for a subscription of twopence a week. He also read the works of Tom Paine, which had been banned in the 1790s.

At the Marlylebone society Davidson met another black Jamaican-Scot and Wesleyan radical – Robert Wedderburn – the son of a Scottish plantation owner and black slave who had joined the radical Spencean Philanthropists and became famous as a campaigner against slavery. Davidson joined the Spenceans and became embroiled in the Cato Street Conspiracy, an entrapment exercise by government spies, which was opposed by Wedderburn.

A police officer was killed by one of the conspirators when the trap was sprung and police raided a hayloft where the men were meeting in Cato Street near Grosvenor Square. Davidson’s presence in the hayloft and possession of a blunderbuss sealed his fate.

Of the eleven conspirators charged, one was freed for testifying for the prosecution, five were transported for life and the remaining five, Davidson among them, were publicly hanged outside Newgate jail on May 1, 1820. They were decapitated and their heads were held aloft with the ancient cry ‘Behold the head of a traitor!’.