May 8th 2020 marked the 75th anniversary of VE Day – the end of the Second World War in Europe. During the six long years of conflict, the WS Society kept a scrapbook of news about Writers to the Signet in service at home and abroad. James Hamilton introduces this poignant resource.

One morning immediately following the outbreak of the Second World War, the Signet Library’s Librarian Dr Charles Malcolm led his team of staff upstairs to a display case in the Upper Library. One by one, every staff member wrote their name and job title on the bare wood at the bottom of the case. Someone added the day’s date to the names. It is difficult to connect now with the apprehension and fear for the future that would have accompanied the staff’s actions that day. The absences created by the 1914-1918 Great War were still fresh and painful, as were the battle memories of those members who had survived. Although no staff died on active service, all bar one would never work again. Assistant John Robertson, who joined the Library in 1919, had been at Gallipoli and ended his conflict in the war hospital at Southampton stricken with typhoid fever.

When peace came again in 1945, it was Robertson who volunteered himself to compile the 1939-1945 Active Service Record, which the Signet Library has recently digitized and made available online. The sheer intensity of 1939-1945 meant that not every WS whose exploits were deserving of record made it into the scrapbooks, but the stories of those that do feature paint an extraordinary picture of bravery, tragedy, and selflessness. This is particularly the case in the incident that led to the awarding of the WS Society’s first George Cross to Lieutenant Alexander Hodge, solicitor of Rattray. 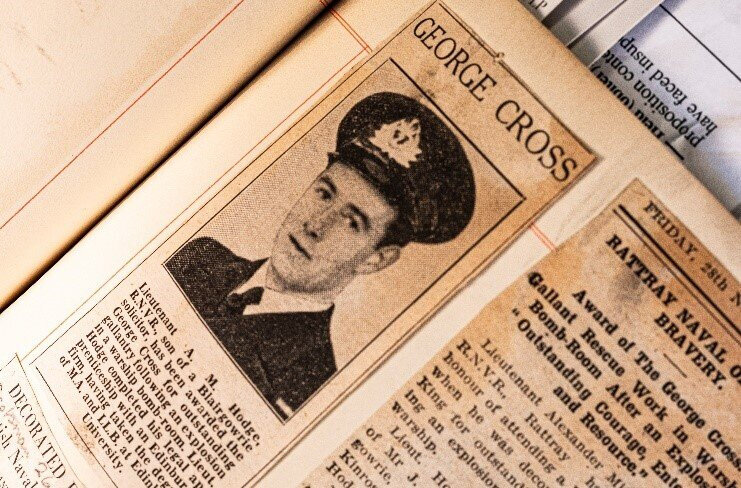 Like so many other Writers to the Signet, Hodge had been a member of the volunteer services in the years leading up to the War, his time in the Royal Naval Volunteer Reserve leading to his commission on board HMS Eagle. In August 1940, with the War still in its first year, there was an explosion in Eagle’s bomb-room. Hodge was on the main deck at the time, and immediately volunteered himself downstairs to a chamber “in darkness, full of heat and fumes” with injured and dying men on the floor. Hodge was “able to rescue and send up several badly-injured men” but in doing so realized that there was another, “trapped under two very heavy bombs.” With assistance, he freed this man and did not return to the deck until he was confident no one else in the room was left alive. “He saved all the lives he could though, for all he knew, further fatal explosions might have occurred at any moment.”

Not every exercise of courage could be recorded. An unknown number of Writers to the Signet worked in intelligence, and one, Robert Bertram Laurie WS, is believed to have been engaged with the French Resistance behind enemy lines an entire year before the declared, official date on his call-up papers. Ian Mackenzie WS is recorded merely as having been killed at Roumana in April 1943, but the memoirs of his commanding officer at the Battle of Wadi Akarit, Major Davidson of the Seaforth Highlanders, recalls that when the surviving dozen or so of the company formed up in a final last-ditch defensive position, “Ian Mackenzie had disappeared. He was afterwards found well forward. He must have been cut off but had fought to the last. There were three dead Germans lying near him”.

Not every story in the record ends this way. A worried piece in the Evening Dispatch of May 1943 records the disappearance in the Western Desert of Major Patrick Oliphant WS, a well-known cricketer in peacetime and the son himself of a Writer to the Signet. But Oliphant was alive and in the hands of the enemy. His imprisonment at Tunis would last less than a month before British forces overtook and freed the city, and he would fight on. Oliphant was wounded on the beach at Anzio in 1944 and survived the War, ending it an acting Lieutenant-Colonel. He would go on to become Deputy Keeper of the Signet in 1964. 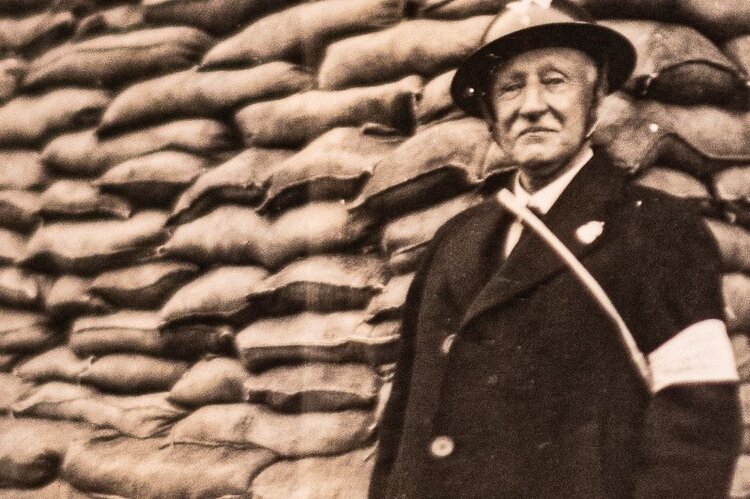 Nor are the scrapbooks solely devoted to the WS Society’s fighting members. In December 1939, Dr Malcolm pasted in a cheery photograph of one of the Society’s oldest members, William Ketchen WS, wearing an Air Raid Warden uniform and steel helmet in his 80s and beaming at the camera before a wall of sandbags. The photograph was signed with his warm Christmas wishes. In peacetime he had been election agent for Prime Minister Herbert Asquith and Keeper of the Register of Sasines in Register House.

But losses were grievous and went right to the very top of the Society. Deputy Keeper Sir Ernest Wedderburn’s son, also Ernest, was a leading Scottish mountaineer and author of a book on the subject. He had badly weakened his heart in the execution of a daring mountain rescue in the late 1930s, but desperate to play his part he concealed this from recruiters and officers alike, serving in France and North Africa before joining the long brave Scottish slog northwards through Italy (commemorated by the great Hamish Henderson’s song “We Are the D-Day Dodgers”). He was killed in an accident in Aquila late in 1944 and a copy of his book was donated to the Signet Library in his memory.

These are just a few of the stories preserved at the Signet Library which continues as the place of record of the lives and service of Writers to the Signet and others. We are keen to hear receive recollections of lawyers’ service in any form.