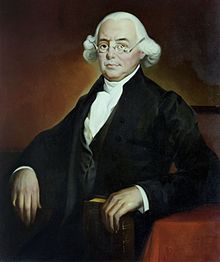 Global attention has recently focused on the appointment of Brett Kavanaugh to the US Supreme Court, but Graham Ogilvy reports that the appointment of Scottish lawyer James Wilson as one of the first six SCOTUS justices was also controversial — when Wilson was twice incarcerated in a debtor’s prison while a sitting judge and narrowly avoided impeachment for promoting legislation that favoured his fellow land speculators.

James Wilson was born the son of a Fife farmer near the village of Ceres in 1742 and, at the age of 15, won a scholarship to St Andrews University where he was exposed to the powerful influences of the Scottish Enlightenment that also inspired his fellow founding fathers Thomas Jefferson, James Madison, Richard Henry Lee and Alexander Hamilton.

Wilson emigrated across the Atlantic in 1765 and, having secured a traineeship in the office of prominent lawyer and politician John Dickinson, was admitted to the Pennsylvania Bar in 1767.

He enjoyed a stellar legal career that would see him earn a small fortune and become one of only six founding fathers to sign both the Declaration of Independence and the US Constitution in the drafting of which he played a key role. Indeed, his influence on the creation of the US Constitution is difficult to overstate.

He was appointed advocate general for the King of France, for which he received a substantial annual payment, and was the first Professor of Law at the institution which would become the University of Pennsylvania.

In 1779, after the British abandoned Philadelphia, Wilson successfully represented 23 wealthy residents facing property seizure and exile by the radical government of Pennsylvania and was almost lynched as a result. A mob marched on Wilson’s home where he and 35 of his colleagues barricaded themselves in his house, later nicknamed “Fort Wilson”. In the subsequent fighting, six people died and around 20 were wounded before Wilson was rescued by dragoons.

In 1789, George Washington appointed Wilson an associate justice of the Supreme Court, although Wilson had earlier lobbied to be made Chief Justice. He was the only judge not to have been born in America and, when he died in 1798, became the first to pass away while in office.

But Wilson’s performance on the Supreme Court was distinctly lacklustre and did not live up to his early promise or match his significant achievements. He had become obsessed with money and land speculation. He purchased options or warrants to buy great tracts of land which he renewed with borrowed capital. The widespread speculation in which Wilson was an enthusiastic participant ended when the bubble burst with The Great Panic of 1796-97, which resulted in his bankruptcy.

Wilson’s business dealings had distracted him from his legal career and he was the subject of much criticism when he used his position to attempt to influence the enactment of legislation in Pennsylvania favourable to land speculators.

Wilson was briefly imprisoned for debt both in New Jersey and North Carolina. He appears to have had a nervous breakdown as a result of the experience and died in 1798, aged 55, at the home of James Iredell, a fellow Supreme Court justice who had given him shelter.