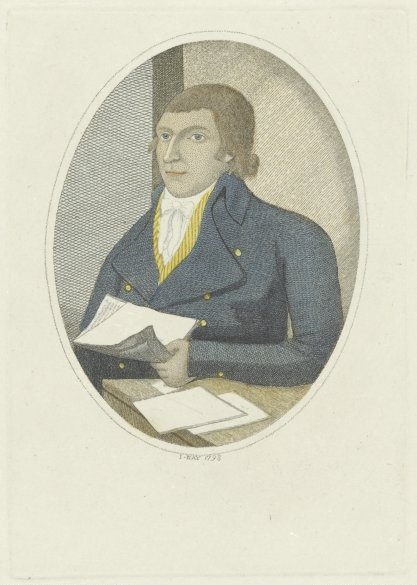 George Mealmaker, transported in 1798 to Australia for sedition, was a political giant and visionary who deserves to be recognised in Scotland today, writes Graham Ogilvy.

The trial of George Mealmaker in 1798 was the last of the great sedition show trials held to suppress the democratic agitation in Scotland that followed the French Revolution.

Numerous trials of lesser activists continued until even the hand-picked, ‘packed’ Scottish juries began to acquit, but with the transportation of Mealmaker for 14 years, the radical movement for democratic reform was struck a grievous blow.

Mealmaker was a talented weaver in Dundee, a city which was a hotbed of radical politics. He was a charismatic and highly intelligent working class intellectual, a fact underscored by John Kay’s etching which shows Mealmaker sporting the short haircut favoured by radicals (the establishment still favoured wigs and queues) and clutching a sheaf of documents to emphasise his learned status.

Mealmaker was a leading light in the Dundee Friends of Liberty set up in the wake of the French Revolution. His first brush with the law came in 1793 when he gave evidence at the trial of the Reverend Thomas Fyshe Palmer who was accused of publishing and distributing an anti-war leaflet opposing war with France (a document which has a curiously modern feel to it and could have been written to oppose war with Iraq).

Scotland’s Lord Advocate Robert Dundas (whose home in Edinburgh had been attacked by a radical crowd) wrote to his uncle, Henry Dundas – the British Home Secretary – that the Eton-educated Palmer was “the most determined rebel in Scotland”. A title which almost certainly belonged to Mealmaker.

During the trial, Mealmaker testified that he had written the offending leaflet. But the Crown had Palmer in its sights and the unfortunate minister was sentenced to transportation to Botany Bay and was shipped out on the same vessel as the Scottish advocate Thomas Muir. The treatment of the two men prompted Robert Burns (the Bob Dylan of the radical movement) to write Scots Wha Hae.

Apart from a brief period of incarceration in Arbroath, Mealmaker escaped the repression of 1793-94 which saw further trials and the deportation of William Skirving, Maurice Margarot and Joseph Gerrald, who along with Muir and Palmer became known as the Scottish Martyrs and are commemorated on an obelisk on Calton Hill in Edinburgh.

Driven underground (Tom Paine’s Rights of Man had been banned by the government), Mealmaker helped found the United Scotsmen, a more radical, revolutionary organisation which maintained links with the United Irishmen through a Perth-based intermediary rejoicing in the name of Robert Sands.

The Dundee weaver went on to write the rules and constitution of the secretive United Scotsmen which had secret oaths and was organised in small cells to defeat spies and informers. Mealmaker also authored a pamphlet called the Moral and Political Catechism of Ma, calling for the franchise to be extended and an independent Scotland.

When Robert Dundas finally realised who really was the most determined rebel in Scotland, Mealmaker was arrested and tried for sedition in 1798. Such was the loyalty that he inspired that a young supporter from Cupar was sentenced to seven years’ transportation for refusing to give evidence against his comrade.

Mealmaker’s fate was sealed. Not least because of a document that was produced purporting to show a list of great estates to be broken up and distributed among the peasants – the estates of all but one of the jurors appeared on the list.

During his time in Botany Bay, Mealmaker introduced weaving to the colony and helped establish a mill to employ female convicts.

But he had another stroke of bad luck when the mill burned down. A new governor had been appointed who had a deep personal loathing of rebels. Captain William Bligh declined to build a new mill and Mealmaker died in poverty in 1808 – just months before Parliament received a petition with 16,000 signatures demanding his return.

Aside from a small vennel named after him in Forfar, Mealmaker’s contribution to the development of democracy in Scotland remains to be recognised.