Our Legal Heritage: The murder of Emmett Till

As the US passes a bill named for a young boy whose brutal racist murder shocked America and the wider world, SLN takes at look at the the case and the injustice that followed.

On August 28, 1955, 14-year-old Emmett Till, an African American boy from Chicago, was tortured and murdered by two white men for allegedly flirting with a white woman four days earlier.

On August 24, Emmett, who was visiting family in Money, Mississippi, drove with a group of them to Bryant’s Grocery & Meat Market. Emmett entered the store with one of the other boys, who made his purchase and left. Emmett was left alone with Carolyn Bryant, the white woman who was working at the counter. She later claimed in court that Emmett put his hand on hers and asked “How about a date, baby?” She also accused him of grabbing her waist and saying “You needn’t be afraid of me, baby I’ve [slept] with white women before.” The boy’s cousin, Simeon Wright, however, cast doubt on the account. Writing about it decades later, he said that, having entered the store less than a minute after his cousin, he saw nothing that would support Bryant’s account. He said that Emmett “paid for his items and we left the store together”.

There is general agreement that after they left, and as Bryant was leaving the store and heading towards her car to retrieve a gun – as she testified – Emmett whistled at her. His cousin said it was “a loud wolf whistle, a big city ‘whee wheeeee!’” His cousins knew they were in danger and the group rushed to the car and left Money.

The following day, the woman’s husband, Roy Bryant, found out about the incident. On August 27, he made plans with his half-brother, John W. Milam, to kidnap Emmett and “teach him a lesson”. They ultimately found him at the home of “Preacher” Moses Wright. They threatened to kill the family if they told anyone they had come to take Emmett.

The exact details of what followed are unknown. Bryant and Milam said they had initially intended to “just whip him…and scare some sense into him”. Based on Emmett’s recovered body it is clear, however, that he was tortured and his body dumped in the Tallahatchie River. 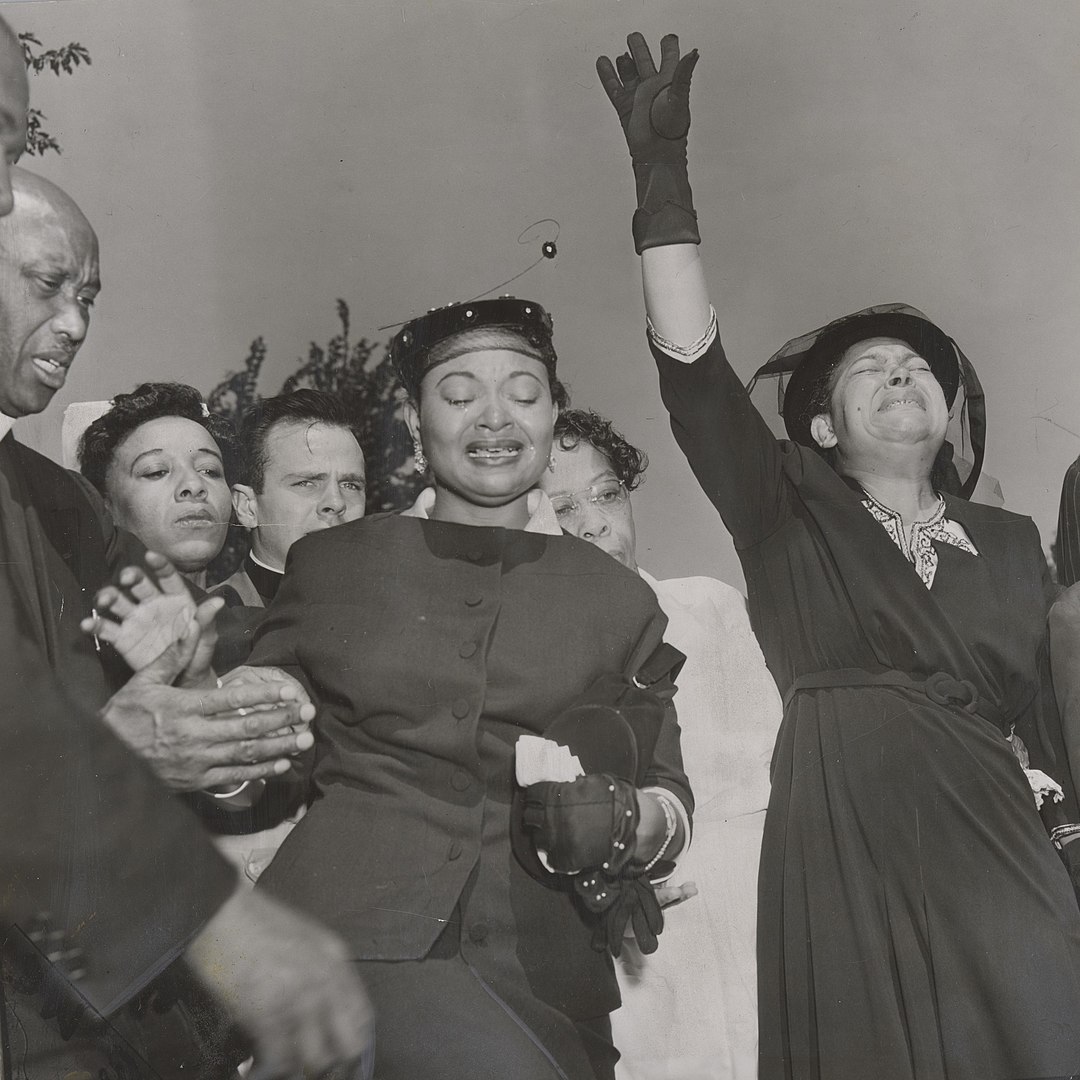 Mamie Till at Emmett's funeral

Later, at the Illinois Central Station in Chicago, a crowd gathered to see five men lift a paper-wrapped bundle containing Emmett’s body and place it in waiting hearse. His mother, Mamie Till, wailed: “Oh, God. Oh, God. My only boy.” She insisted his body be displayed in an open casket at his funeral on September 2 in Chicago – which some 50,000 people attended.

His mother told reporters: “Unless an example is made of the lynchers of Emmett, it won’t be safe for a Negro to walk the streets anywhere in America.”

Bryant and Milam were arrested within a day of Emmett’s disappearance. They admitted to taking him but claimed they had released him in Money.

Before the murder trial, Mississippi Governor Hugh White telegrammed District Attorney Gerald Chatham “urging vigorous prosecution of the case”. Chatham said: “Murder is murder whether it is black or white, and we are handling this case like all parties are white.”

Local newspaper, the Greenwood Commonwealth stated in an editorial: “The citizens of this area are determined that the guilty parties shall be punished to the full extent of the law.”

Yet opposition from northern opponents of segregation irritated Mississippians and led them to support Bryant and Milam. All five lawyers in the town of Sumner, where the trial was to be held, agreed to defend the men. No black people were eligible to serve on the jury.

Moses Wright, first witness for the state, identified the men as those who had come to his home and taken Emmett.

Carolyn Bryant alleged that Emmett had behaved inappropriately towards her in the shop and also claimed he used an “unprintable word”. Judge Curtis Swango ruled her testimony inadmissible, though it had been widely disseminated before the trial and would have been in the minds of the jurors.

Sheriff H. C. Strider appeared for the defence. He claimed the body found was not Emmett’s on the basis that its state of decomposition implied it had been there for “ten to fifteen days”. No one has ever been convinced of this suggestion.

District Attorney Chatham said: “They murdered that boy, and to hide that dastardly, cowardly act, they tied barbed wire to his neck and to a heavy gin fan and dumped him into the river for the turtles and the fish.”

He added that they “were dripping with the blood of Emmett Till”.

The defence told jurors: “Every last Anglo-Saxon one of you has the courage to set these men free.”

Historian Hugh Whitaker says that Sheriff-elect Dogan told jurors to purposely wait a while before coming out with their verdict to make “it look good”. They returned a verdict of not guilty.

Six weeks later, a Leflore County grand jury refused to indict the men on kidnapping charges, and both were released from custody.

They confessed to the murder months later in a paid interview with Look magazine but were protected from prosecution under double jeopardy laws.

The outcome of the case incensed the black community. Several cities held protest rallies and there were calls for federal legislation to be introduced to protect the civil rights of black Americans. It marked the true beginning of the civil right movement in the south.

The result of the case also emboldened racists. Two months after the verdict a white man, Elmer Kimbell, murdered a black attendant at a petrol station. He walked free from the same Sumner courtroom in which Bryant and Milam, upon their acquittal, had lit cigars and kissed their wives in celebration.