Our Legal Heritage: The cow that sparked a farmers’ revolt and eight ‘not proven’ verdicts

It’s the subject of poems and songs and even has a statue devoted to its memory – Kate Scarborough tells the story of the famous ‘Turra Coo’.

At the beginning of the 20th century, the government introduced the National Insurance Act 1911, which required employers to make compulsory contributions for all workers between the ages of 16 and 70. This caused widespread outrage among the farmers in Turriff, a town in Aberdeenshire which relies heavily on farming.

Robert Paterson was one of the Turriff farmers who protested the new scheme, introduced by the Chancellor of the Exchequer David Lloyd George, and refused to stamp the insurance cards of his employees. He was charged under the new act and sentenced to pay a fine and the arrears of national insurance contributions.

Mr Paterson paid the fine but refused to pay the arrears, leading to an order for a sheriff to seize property to the value of the debt. The sheriff deemed that the most mobile property was Mr Paterson’s milk cow, a white Ayshire-Shorthorn cross, and on the appointed day the cow was led on foot to Turiff.

On the centenary of the incident, Allen Stephen, of Turriff Heritage Society, told the BBC: “It might have been OK if the sheriff officers had poinded an implement, a plough or something like that, but the whole thing became tied up in an emotional incident because they took the little white cow.”

The cow was due to be auctioned locally, but Mr Paterson had the support of the local people and they refused to allow the sale. As a result, a license had to be granted to allow the cow to be sold publicly using an auctioneer from elsewhere. When the locals found the cow tied in the village square with the words “Lendrum to Leeks” written on her, they began to protest and riot. (Lendrum is the area in Turriff where Mr Paterson’s farm was and Leeks was a reference to David Lloyd George’s Welsh heritage.) 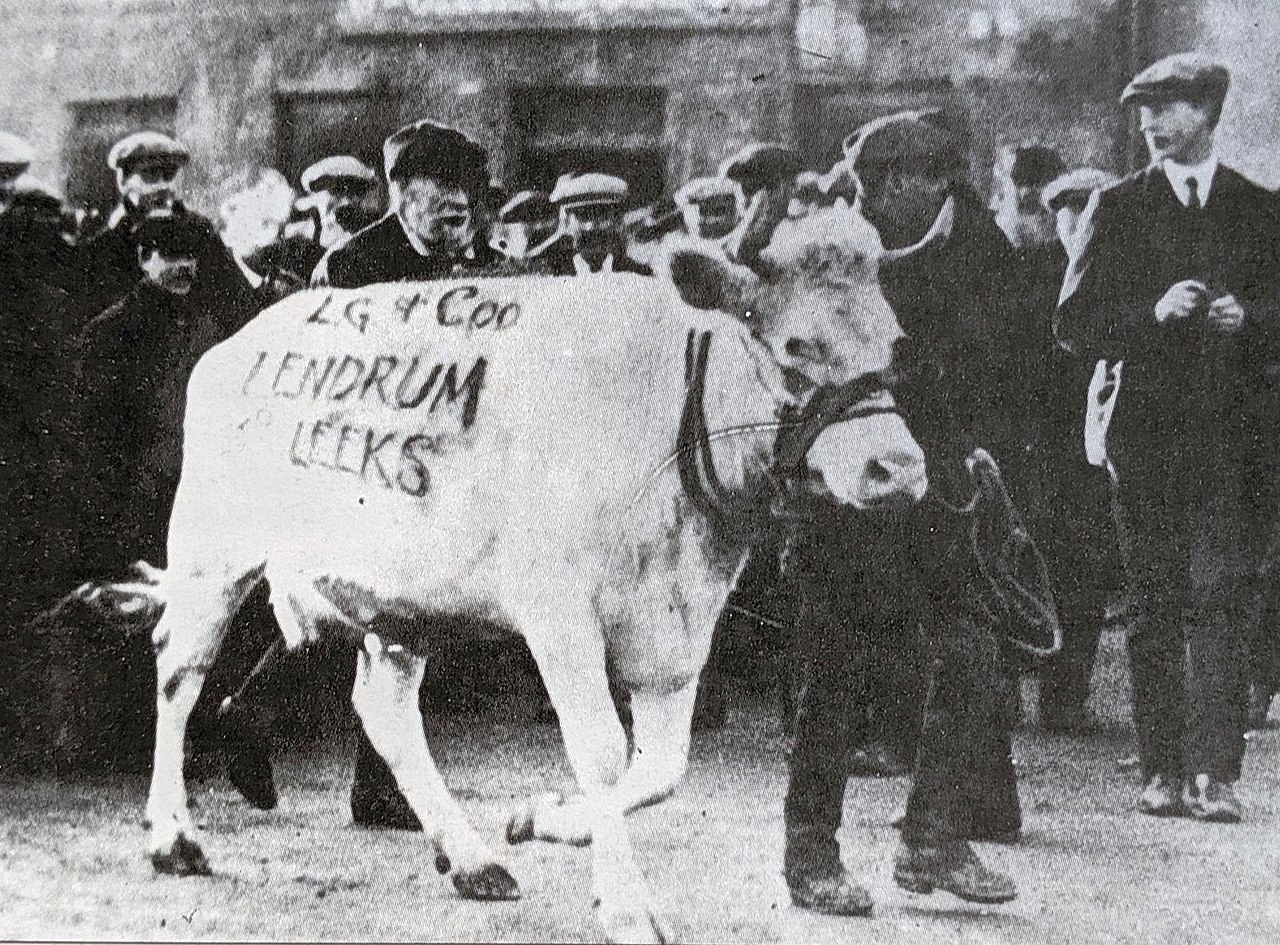 The Turra Coo, painted with the words "Lendrum to Leeks"

A mob of over 100 villagers and farmers bombarded the sheriff’s officers with rotten fruit, soot and eggs. During the commotion, the Turra Coo made her escape – but she was recaptured and eventually taken to Aberdeen and sold to a farmer. Eight farmworkers, including Mr Paterson, were subsequently put on trial in Aberdeen for disorderly conduct, but all received verdicts of “not proven”.

As for the Turra Coo, local villagers rallied together to buy her back and return her to Mr Paterson. Her presentation back to Mr Paterson was a very public affair which saw more than 3,000 people gather to see her return home. To celebrate she was covered with flowers and ribbons and had the words “Free!! Divn’t ye wish that ye were me” painted on her side. She lived out her final six years on the farm and was even buried in a corner of the farmland.

The Turra Coo captured the hearts of the Turriff people in 1913 and continues to attract local and national attention more than a century on. There have been a number of commemorations to her including sculptures and monuments, a film, the renaming of a street junction in Turriff, and the foghorn of Girdle Ness Lighthouse has even been nicknamed after her.