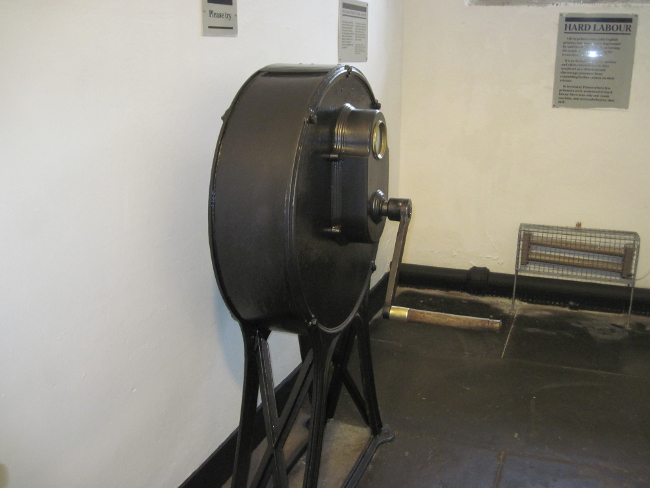 In the latest of our occasional series, Graham Ogilvy visits Inveraray Jail and Courthouse.

Inveraray Jail and Courthouse occupy one of the most beautiful locations of any of Scotland’s legal establishments and is well worth a visit.

The occupants of the 12-cell jail, alas, would not have had much of an opportunity to enjoy the views. Their life in the New Prison, which opened in 1848, was healthier in that water, light and heating were introduced and the medieval-like dungeons of the old prison were replaced.

But life was made deliberately hard for the men, women, children and mentally-ill incarcerated by the shores of Loch Fyne. New prisoners were given an uncomfortable wooden bed with a wooden pillow for the first 31 days of their confinement just to emphasise the misery of their situation.

Prisoners slept, ate and worked in their cells and were only allowed out for exercise once a day or to go to the washroom or WC.

In Inveraray,  most male prisoners made herring nets or picked oakum. Some with special skills were employed at shoemaking, tailoring or joinery work. Female prisoners picked oakum, knitted stockings or sewed.

Making herring nets and picking oakum were the main prison occupations. Inveraray was a busy herring port until the late 19th century and the nets were readily sold to local fishermen.

Oakum was the fibre obtained from short lengths of old rope that had been picked or teased apart. It was mostly sold in Greenock and was used for caulking or sealing the seams of wooden ships and for stuffing mattresses.

(Curiously the practice of picking oakum survived well into the 20th century in Scottish jails. I once interviewed a former prisoner who served time in Perth prison in the 1930s for sedition after leafleting RAF servicemen at Leuchars urging them to desist from bombing Indian hill villages. His task was to distribute sacks of old rope to prisoners in their cells but instead he supplied his comrades with sacks of the finished item!)

Life in the prison was made more unpleasant by such hard labour tasks as turning the crank machine. It was thought that these useless and often exhausting activities would act as a deterrent and discourage prisoners from committing further crimes on their release.

The crank machine, a form of pointless labour, was introduced in the middle of the 19th century to make prison life tougher for those prisoners sentenced to hard labour. Male prisoners had to turn the handle 14,400 times a day forcing four large cups or ladles through sand inside a drum.

The number of revolutions was registered on the dial. The Warder could make the task harder by tightening a screw, hence the slang word for prison warder – “screw”.

Poignantly, several women were jailed for ‘child murder and concealing pregnancy’. This practice was widespread in poverty-stricken Scotland where women had to face the shame of having an illegitimate child as well as the grim economic consequences of another mouth to feed. Newborn babies were routinely smothered, a practice known as ‘covering the bairn’.

But there is evidence that such cases were treated with some compassion at Inveraray with women being as sentenced to as little as three months for a tragic crime.