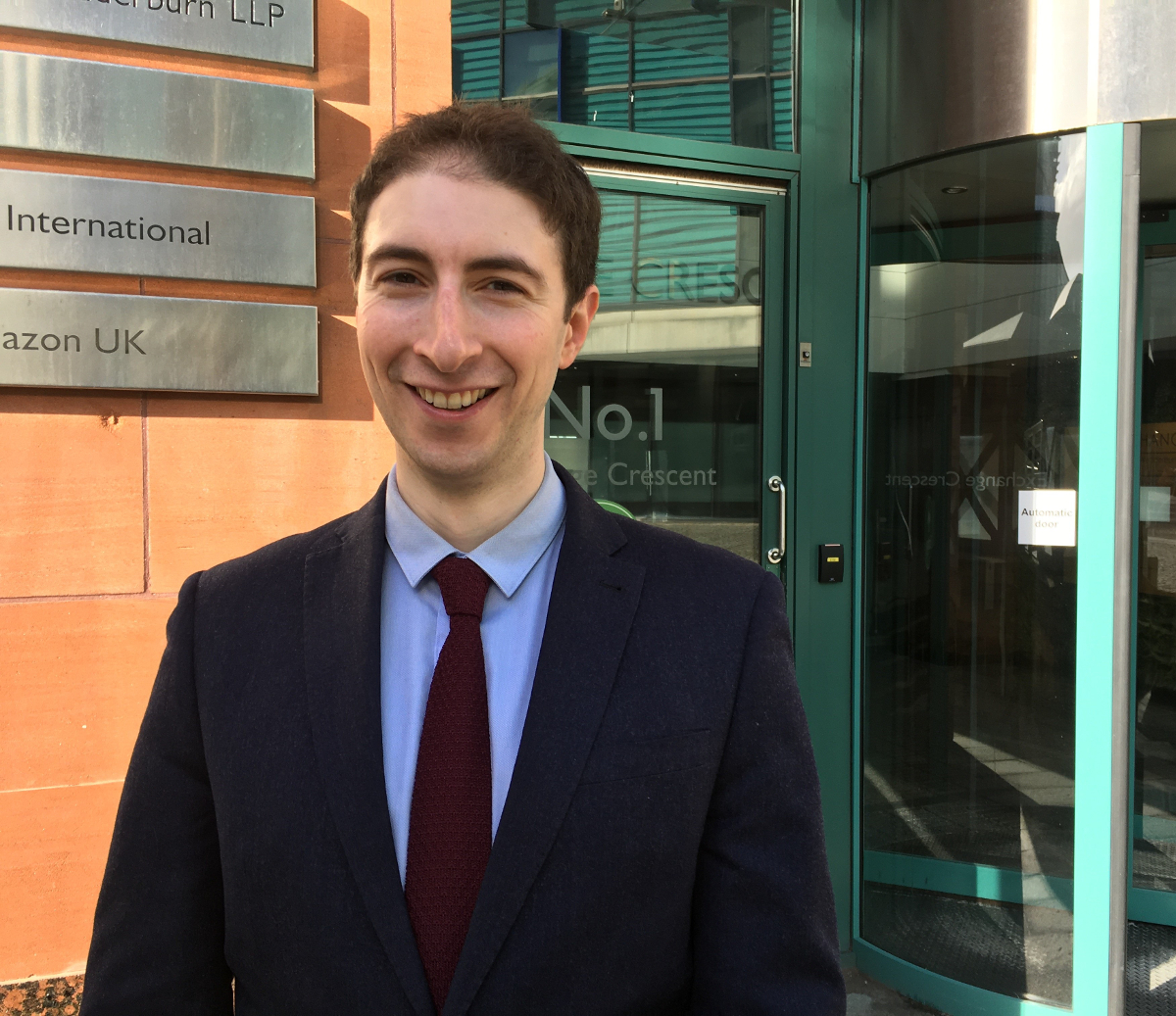 When Russia invaded Ukraine, there was an outpouring of sympathy from many for the nation under attack. A lawyer who decided action was needed and quickly used his professional experience to provide support to Ukrainians is John Vassiliou, a senior associate at Shepherd and Wedderburn.

Mr Vassiliou, who specialises in immigration and nationality law, set up the Ukraine Advice Project UK along with a group of peers almost as soon as the conflict began.

He says: “Five friends and I set up the service to match Ukrainian people wanting UK immigration advice with specialist lawyers willing to provide free advice. We set it up on 28 February, quite early in the Ukraine conflict. I was travelling to Oxford to visit a friend for their house-warming party. On the way, I felt helpless reading online about all the upsetting things that were happening in the conflict, including people desperate to get out of Ukraine.

“People were asking questions about how to get to the UK, but there were no special immigration schemes set up at that point. There were a lot of people online saying that someone should do something, but nobody in the legal sector had actually taken any action. Knowledge on immigration is something I could offer. At the party there were lots of immigration lawyers and I was cajoling them into doing something.”

The idea they came up with when they met again the following day was to create a portal which people with questions about emigrating from Ukraine to the UK could contact. They moved rapidly and the Ukraine Advice Project website went live the following day.

“We set up a Gmail account so people could email in questions,” explains Mr Vassiliou. “By the time the site went live the situation in Ukraine had worsened over the weekend. There was increased interest in getting to the UK lawfully and safely. On the Tuesday morning we logged onto the inbox and there were hundreds of enquiries.”

With the number of enquiries far exceeding the group’s expectations, Mr Vassiliou says they started contacting other lawyers to get more people on board. “The response from the legal profession blew us all away. We had hundreds of immigration specialists from all sorts of disciplines, such as solicitors, barristers, advocates in Scotland, regulated immigration advisers, legal executives and retired judges all saying they want to help. It was amazing,” he says.

Mr Vassiliou adds: “Some of the things we were reading in the email enquiries were very harrowing. We were getting messages like ‘a bomb has landed on the building next door. I need to get out, help me’.”

The group decided to reach out to global law firm DLA Piper, which has a dedicated pro bono department and the infrastructure to handle the Ukraine Advice Bureau. It agreed to take on the administrative responsibility in conjunction with law firms Hogan Lovells and Evershed Sutherland, while the founding group of solicitors remained involved with the project’s management. The firms also up-skilled lawyers who were not immigration specialists to enable them to respond to standard queries, while passing anything more complex onto a specialist lawyer for bespoke advice.

The project is still receiving queries, but not on the same scale as in its early stages. To date, about 600 volunteer lawyers have worked on the project and it has responded to more than 4,000 requests for advice.

“I’m very proud and privileged at being able to work with such an amazing group of people that helped make this happen. Without everyone coming together, it never would have taken off,” says Mr Vassiliou.

But he might never have become a lawyer and be in a position to support Ukrainians had he stuck to his original plans. He initially went to the University of Glasgow to study accountancy because it seemed like solid career. He did a compulsory business law module and enjoyed its problem-solving aspects and the opportunity to help and advise people face-to-face. This led to him dropping his accountancy studies and taking up law.

Mr Vassiliou explains that he didn’t make a conscious decision to become an immigration and nationality lawyer, but it “just felt like the right fit”. “I’m from a mixed nationality family,” he says. “My mum is Scottish and my dad is Greek. I think that has given me a natural affinity with people who migrate.”

During his studies he spent a year at university in Brisbane where he completed a module in immigration and refugee law, and on his return to Glasgow he chose an immigration and asylum law course before specialising in those sectors.

While setting up the Ukraine Advice Project is one of his career highlights, it’s not the only one. He refers to acting for two elderly Iranians seeking to remain in the UK on human rights grounds in 2019 while he was with specialist immigration law firm McGill & Co.

Mr Vassiliou explains that the couple were parents to four British children and grandparents to 11 British grandchildren, all of whom lived locally in Edinburgh. The couple had been visiting the UK regularly since the 1970s and owned a flat in Edinburgh. In 2014 they applied for permission to stay in the UK. The Home Office and the courts repeatedly refused their case over a five year period.

“We had a final immigration tribunal appeal hearing date listed for early 2019,” he says.

“A month before the hearing, I was able to arrange a piece about the case in The Guardian. This article went viral and was covered by all major TV news channels and newspapers. We managed to gather over 125,000 signatures on a petition to prevent their deportation. By briefing their local MP and MSP I was able to get this case raised in Parliament and by the Scottish government, and also at the Council of Europe.

“It turned out that one of their grandchildren played rugby for Edinburgh. The rugby player’s involvement gave the case a further boost in the press. In the face of this public pressure the Home Office backed down and granted permission to the couple to remain in the UK with their families, sparing us a difficult court hearing.”

He adds that the case demanded round the clock attention for a few weeks until it was resolved, but it showed him the value of Twitter and media engagement and reinforced. the importance of seeking out alternatives to litigation. To mark the achievement, he was invited to a celebratory Persian dinner with the whole family round the table.

Another career highlight for Mr Vassiliou is being involved in a Supreme Court case while at McGill & Co, which he says is relatively unusual for a Scottish immigration practice. It involved a challenge on historical gender discrimination under British nationality law. Before 1983, British women who were born outside the UK were unable to pass their citizenship onto their children born outside the UK, whereas British males in the same situation could do so. “There were a large number of people affected by this gender discrimination who weren’t able to become British citizens. Our client was one of them. It took about five years of litigation and the Supreme Court case to get the law looked at.

The law has just recently been changed to reflect our success at the Supreme Court,” says Mr Vassiliou.

An additional highlight is representing a man in a Windrush-type case, but before the term ‘Windrush scandal’ was widely used. Mr Vassiliou represented a man who had lived in the UK since the 1960s, having been brought over by his mother from Pakistan. The man was in the UK lawfully but didn’t have a document to prove that. The Home Office wanted to return him to Pakistan. The outcome of the case was to stop the Home Office sending him back to Pakistan and obtain a document confirming his entitlement to reside in the UK.

Mr Vassiliou says his move to Shepherd and Wedderburn in March 2021 has given him a great opportunity to branch out into the area of business migration, having previously focused on personal migration cases. “With the double whammy of Brexit and Covid, businesses are really looking to immigration lawyers now, for example in terms of how to recruit or retain foreign national staff.”

The legal profession, including the immigration and human rights sector, is not without its challenges. He laments that certain people in power and branches of the media describe some in his sector as “activist” lawyers or “do-gooders”. “Lawyers representing their clients are just lawyers doing their professional duty. In an increasingly populist climate, the eagerness with which anti-lawyer rhetoric has been deployed is worrying,” he says.

A change he does welcome in the legal profession is the acceptance of remote and flexible working since the pandemic, a trend he believes is unlikely to be reversed.

Mr Vassiliou concludes: “What has been demonstrated over the past couple of years is that people can be as productive when they are given flexibility to work from home, as well as in the office. It’s important that people do still meet up in an office to collaborate, but it’s nice to have flexibility. It will be exciting to see how we as a profession adapt to give legal advice to clients in a more digital world.”