Welcome to SLN’s new book review feature where we review some of the latest non-fiction books that may be of interest to our readers. In our first feature Graham Ogilvy finds the war-time memoir of a Jewish refugee fleeing Nazi persecution both timely and moving while Flora Edgar enjoys a biography of much-loved Scottish artist George Wyllie. 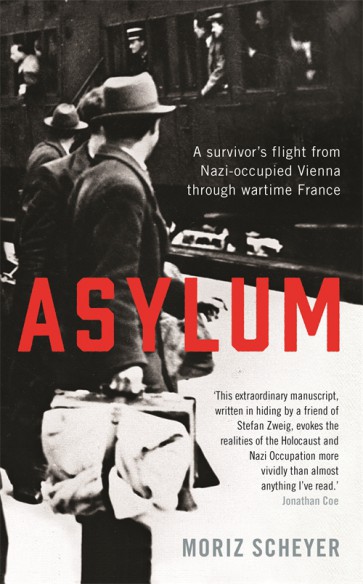 Life on the run from the Nazis

Like Irene Nemirovsky’s Suite Francaise this book lay for decades in an attic as an unpublished and forgotten manuscript. Moriz Scheyer’s testament of desperation and fear, hope and humanity, was penned by the former Viennese arts critic while hiding in a convent in the Dordogne between 1943 and the liberation. Luckily it was discovered by his grandson and the result is Asylum, a compelling and powerful account of life on the run in Austria and France struggling to stay a step ahead of the Nazis.

Scheyer and his wife had the great good fortune to stumble into the arms of the Rispals, a family of Communist resisters who took them to the nuns but along the way they encounter the usual sorry specimens of humanity. The people smugglers or passants, the corrupt Vichy policemen stripping refugees of their cash, the heartless and the spiteful, the fairweather friends and the careerist collabos — they are all here — a cast from a shameful period of French history with which France has yet to come to terms.

Written contemporaneously, Asylum has a searing immediacy lacking in some other memoirs of the time. It has anger, bitterness and frustration too as Scheyer recounts the roller-coaster ride that takes them from the clutches of genocidal maniacs to the safety of the French countryside. During his spell in a Vichy concentration camp Scheyer sees great men become little men and vice versa.

Nine thousand Viennese Jews committed suicide in the first five months of the Anschluss and in 1945 during his first few weeks of freedom Scheyer offers us a timely reminder: “I cannot rid myself of a feeling of bitterness when I think of the endless forest of red tape that was put in our way by most states at that time, as we begged for visas. With a little good will, it would have been possible to save everybody.”

Among the good guys, I was pleased to discover a Scotsman. Scheyer expresses his undying gratitude to Alec Cairncross, a Glasgow University lecturer, later Sir Alec Cairncross the economist and government adviser, who ran the International Student Service which secured the funding that enabled Scheyer’s stepson to escape Vienna and study in Scotland.

One of the things I will take from this book is the conviction that ordinary people can make a difference.