The Russian authorities must immediately end their assault on academic freedom and the right to freedom of expression, Amnesty International said today as a campaign to purge schools and universities of dissenting opinions about the aggression against Ukraine escalates.

Bruce Millar, Amnesty International’s acting director for Eastern Europe and Central Asia, said: “Russian civil society organisations, which mostly oppose the Russian invasion of Ukraine, are not the only victims of a domestic crackdown on anti-war activities. Academic freedoms are also being stamped out, with educators forced to spread anti-Ukrainian propaganda and glorify Russia’s ‘special operation in Ukraine’ — or else lose their jobs.

“We have received worrying reports of educators fired for their anti-war remarks, and of children and young people forced to participate in state-run pro-war themed ‘flash mobs’ or attend lectures that push the Kremlin’s narrative.”

Dozens of schoolteachers and university lecturers have faced harsh reprisals for speaking out against the war in Ukraine. Some have been put behind bars to serve so-called administrative arrest or have had to pay extortionate fines simply for expressing their opinions either publicly or in the classroom. Others have been dismissed or otherwise reprimanded.

Roman Melnichenko, associate professor at Volgograd State University, was dismissed on 19 April for an “immoral disciplinary offence” that “violated ethical and moral norms” when he re-posted an anti-war message on VKontakte, a popular Russian social network. He was dismissed after the local prosecutor’s office informed the university he had faced administrative proceedings.

Some educators have been reported to the police by their own students or colleagues. Elena Baybekova, a maths teacher from Astrakhan, southern Russia, was dismissed on 1 April. One of her students had objected to “political conversations” during her class, after which she was accused of “absence without leave” and dismissed. She had previously participated in a protest against the war in Ukraine, for which she was sentenced to five days in detention. She denies talking about politics during her class.

Marina Dubrova, an English teacher from Korsakov on Sakhalin island, was dismissed on 5 April. Less than a week earlier, she had said the war was “a mistake” when talking with students during a break. A student recorded the conversation in a video. A mother of one of the students saw the clip and reported Dubrova to the police. Three days later, she was summoned to appear in court and fined 30,000 Rubles (£380) for “discrediting the Armed Forces.”

Irina Gen, an English teacher from Penza, Central Russia, is facing a prison sentence under the new criminal offence of disseminating “fake news” about the Russian army. On 30 March, she was charged for criticising the invasion and calling Russia “a totalitarian state” where “any dissent is considered a thought crime”.

She had been reported to the police by her students in eighth grade.

Schoolchildren have also been subjected to war propaganda, which appears to amount to indoctrination, contrary to the aims of their right to education under international law to which Russia is bound. According to Kommersant, an independent Russian newspaper, as early as 28 February, grade 7 to 11 pupils received lessons on the “special military operation” – the term made mandatory by the government to avoid calling it a “war.”

According to the media report, that was based on leaks provided by schoolteachers, students are taught that the war in Ukraine “is not a war, but a special peacekeeping operation” that aims to “protect the population of the Donetsk and Luhansk People’s Republics”. Children are also taught that “anti-Russian sanctions” can have a positive impact on the national economy. Such lessons had allegedly been strongly recommended at the highest levels, but have not been made mandatory.

According to Kommersant, the Kremlin has “highly recommended” that educational institutions install the “Z” symbol – demonstrating support of the Russian war in Ukraine – on building facades and in classrooms. Many schools and kindergartens have also been roped into state-orchestrated war-themed “flash mobs” in support of the “special peacekeeping operation” that have forced children to participate in such assemblies in violation of international human rights law.

“Given the current clampdown on all forms of dissent, it is impossible to know how many teachers or students have been expelled from educational institutions simply for expressing anti-war views. We may never know the total number of children subjected to state-coordinated indoctrination,” said Mr Millar. 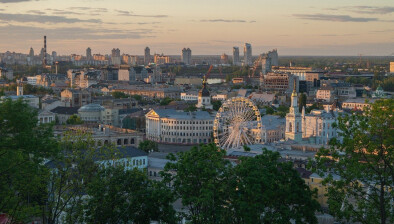