Our Legal Heritage: Test of the bahr-recht 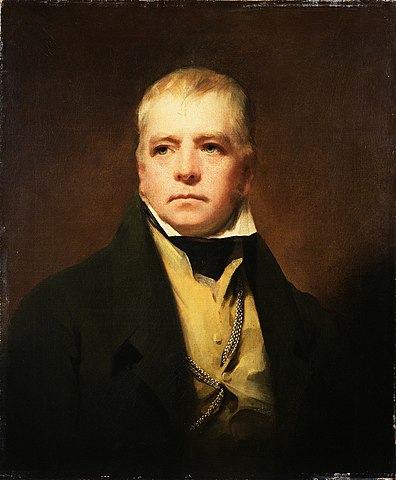 In many of his works Sir Walter Scott referred to real cases and described real criminal court room procedure, drawing on his legal training and experience as an advocate. He once wrote:

“…in the State Trials or in the Books of Adjournal every now and then you read new pages of the human heart and turns of fortune far beyond what the boldest novelist ever attempted to produce from the coinage of his brain”. [The Heart of Midlothian, (1818)]

His library at Abbotsford contains a copy of the trial of Philip Standsfield. An entry dated March 1797 in his private note-book reads:

“Read Standsfield trial and the conviction appears very doubtful indeed. Surely no one could seriously believe, in 1688, that the body of the murdered bleeds at the touch of the murderer, and I see little else that directly touches Philip Standsfield.”

The bahr-recht, or law of the bier, was recognised in Scottish Jurisprudence and Scott’s poem ‘Auchindrane’ was based on the ‘Auchindrane case’ (1811), which, like Standsfield’s, relied on the ‘Bier Test’ as evidence of guilt. He also referred to this test in ‘The Fair Maid of Perth’ and ballad ‘Earl Richard’.

Call’d on by Heaven to stand forth an avenger,
I will not blench for fear of mortal man.
Have I not seen that when that innocent
Had placed her hands upon the murder’d body,
His gaping wounds, that erst were soak’d with brine,
Burst forth with blood as ruddy as the cloud
Which now the sun doth rise on?

[Excerpt from ‘Auchindrane’ or ‘The Ayrshire Tragedy’ by Sir Walter Scott, (1830)]

The maiden touched the clay-cauld corpse,
A drap it never bled;
The ladye laid her hand on him,
And soon the ‘ground was red.

[Excerpt from the ballad of Earl Richard by Sir Walter Scott]

The test of the bahr-recht meant that:

“In a secret Murther, if the dead carkasse be at any time thereafter handled by the Murtherer, it will gush out of blood; as if the blood were crying to Heaven for revenge of the Murtherer.”

It resulted from the belief that the soul has its existence in the blood and that the soul lingered on after death until the murder and murderer had been discovered and their blood shed in vengeance. The earliest reference to its use in Scotland is noted by Robert Pitcairn as A.D. 972 following the murder of King Duffus, son of King Malcolm I.

Philip Standsfield was tried in February 1688 for crimes, including that of Parricide, the murder of his father, Sir James Standsfield of New-Miln. On 28th November 1687 Sir James was found face down in water near the house. Philip believed his father had killed himself, due to a previous suicide attempt, but the manager of the local cloth mills feared that his master had been murdered. Through a friend, he contacted the Lord Advocate, Sir John Dalrymple, who told him that he, and two or three others, should view the body; if there were no signs of foul play, the body could be quietly buried. Philip intercepted the letter and had his father’s body buried the same night. The following night surgeons, James Crawford and James Muirhead, arrived from Edinburgh to exhume Sir James’s body so that it could be examined. His body was carried into the church where an autopsy was conducted by candlelight; their conclusion: Sir James had been strangled. When Philip helped to lift his father’s body back into the coffin, blood began to flow from the neck, on the side Philip held. Onlookers divined God’s hand in indicating the murderer via the institution of bahr-recht.

The case was heard on the 6th, 7th and 8th February 1688. The Lords found the libel proven. The next day a jury was empaneled and the prosecution produced their evidence, including an eye-witness who had seen Philip looking at his father’s body in the water prior to it being found. Counsel for the defence abandoned their client before half of the prosecution evidence had been led, so strong and un-answerable was the case against him.

Philip was found guilty and sentenced to be taken to the Mercat Cross and hanged until he was dead, for his tongue to be cut out and burned on the scaffold and his right hand to be cut off and affixed to the East Port of Haddington. His body was to be hung from the Gallow Lee between Edinburgh and Leith. His name, fame, memory, and honours were to be extinct, his arms to be destroyed and removed from the book of arms and all his goods to be forfeited to the Crown. On the 24th February 1688, the sentence was carried out with Philip protesting his innocence to the end.

The superstitious of the time took note of two incidents relating to his execution: (1) that he had to be strangled by the hangman because the knot in the rope slipped, leaving him with his feet and knees on the scaffold; and (2) that a few days after his body was hung on the Gallow Lee, it was removed and flung into a watery ditch. When it was hung up again, the body was again mysteriously removed and never seen again.