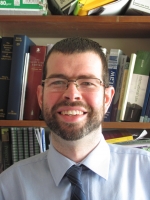 Law lecturer Malcolm Combe has announced he is taking up a new post at the University of Strathclyde in December.

Mr Combe, a solicitor and senior lecturer in law at the University of Aberdeen, admitted in a blog post that it “will be a wrench to leave” the north-eastern city after more than eight years at the university.

He will be lecturing at Strathclyde on Scots private law and has expressed an interest in delivering CPD for lawyers.

Mr Combe added: “Also of particular interest, and admittedly with a spattering of nostalgia, this move to Strathclyde will give me a chance to get involved with a student law clinic that I was a founder member of.

“Of course, the University of Strathclyde Law Clinic has been doing fine without me and (like the DPLP set-up) is suitably well-established, but this move will, I hope, revitalise my own involvement with pro bono; assuming they’ll have me.”