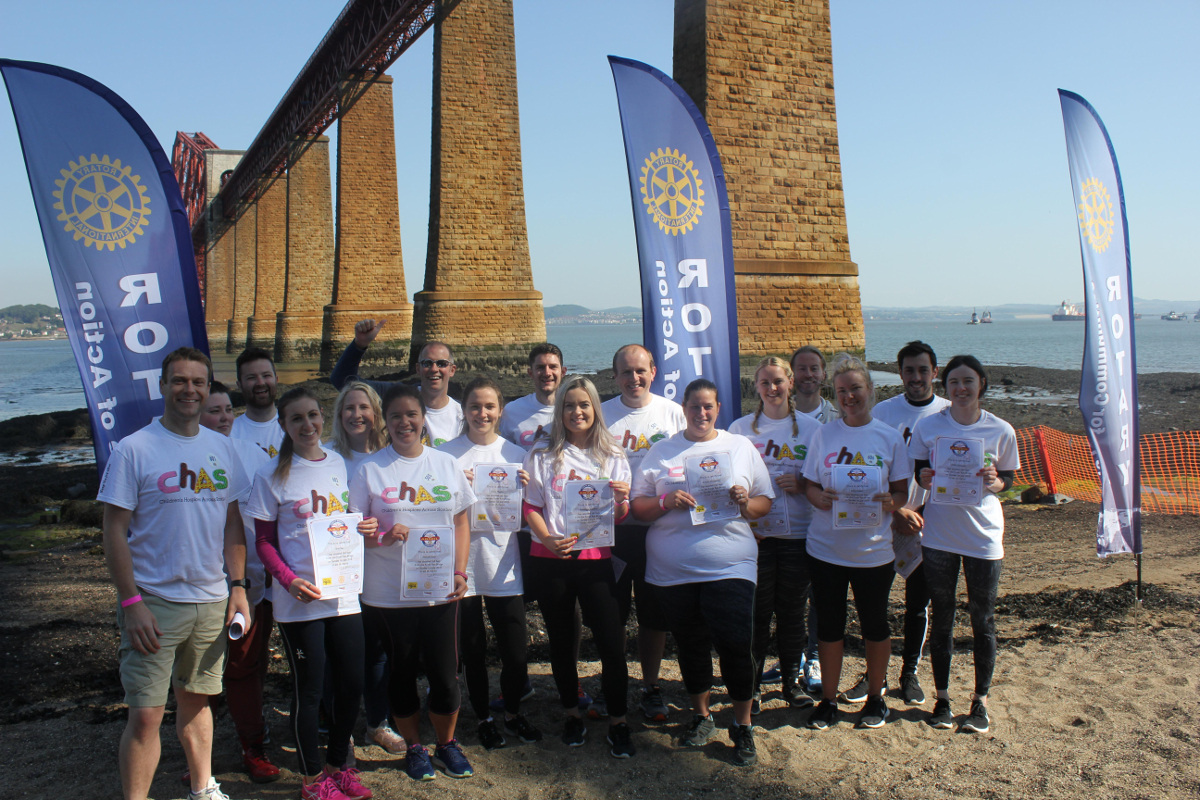 Three charities which support children with life-threatening conditions have received a total of £36,000 from Burness Paull’s charitable efforts in 2018.

The firm has raised more than £18,000 with a wide range of fundraising events – including a Forth Bridge abseil and raffling off a day’s extra annual leave in each city. All funds raised were matched by the Burness Paull Foundation, the firm’s charitable trust set up in 2015.

The Children’s Hospices Across Scotland (CHAS) received more than £22,000 after being chosen by staff at the Edinburgh office. Colin Brown, who works as property director for Burness Paull in Edinburgh, lost his 9-month-old daughter Eilish to the rare genetic condition Krabbe Disease in 2014.

CHAS supported Colin and wife Kirsten after Eilish’s diagnosis. This included visits to Rachel House Children’s Hospice in Kinross and CHAS at Home, where a nurse would come to the Browns’ house to care for Eilish to allow the couple to do things with their two sons.

Mr Brown said: “The CHAS staff were professional and caring to the very end of Eilish’s life [in September 2014] and beyond, in their support for us and our family. Having seen their wonderful work at first hand, I suggested the Edinburgh office could make CHAS its chosen charity in 2018. This was agreed in a vote and I’m delighted we have raised so much money to help other parents unfortunate enough to find themselves in need of the support of CHAS.”

Mr Brown and 16 Burness Paull colleagues abseiled off the Forth Bridge as part of the fundraising efforts.

Angharad Low, corporate partnerships executive at CHAS, said: “We can’t thank Colin and his colleagues at Burness Paull enough for their amazing efforts in raising such a tremendous sum of money for CHAS in 2018.

“Right now, CHAS can only reach one of the three children that die every week in Scotland from a life-shortening condition. This incredible gift will absolutely help us reach more families - on behalf of them, thank you all so much.”

Burness Paull’s Glasgow office raised more than £8,000 for Project GO, a family fund set up by a couple whose two young boys were diagnosed with Duchenne Muscular Dystrophy, a fatal genetic disease which causes deterioration of muscle strength and function.

Project GO was named after George and Owen, the sons of Nick and Kirsty Ohly, who were diagnosed when Owen was three and George only nine months old. Ms Ohly said: “Nick and I are so grateful that Burness Paull adopted Project GO as its Glasgow office charity in 2018. Ten years ago, the future was bleak for boys like Owen and George, but the rapid advances in medical science and gene therapy mean there is real hope of finally finding a cure for Duchenne. We are determined to make a difference for our sons and all families affected.”

In Aberdeen, £6,000 was raised for Charlie House, a charity which supports babies, children and young people with life-threatening and life-limiting conditions - and their families.

It was founded in 2011 by Aberdeen mum Tracy Johnstone, who went into premature labour with twins and lost daughter Eva after only one day. Twin brother Louis spent most of his first year in hospital and required 24-hour, 7-day care. Ms Johnstone and husband Craig experienced the lack of specific support for families with such complex needs in the Aberdeen area - and Charlie House was born.

Kirsty Walker, fundraising co-ordinator for Charlie House, said: “It is only through the generosity of people and companies like Burness Paull that we are able to help the Johnstones and other families. Fundraising is vital to help us develop and grow our projects to support these wonderful children - so we can be there when families need us most.”

“Their efforts are making a real difference to three amazing causes - and to children and their families across Scotland who need their support. The Burness Paull Foundation was delighted to support their efforts by matching the sums raised.”