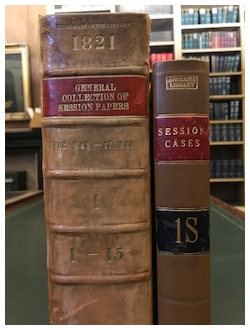 On this day, 200 years ago, the First Division of the Inner House of the Court of Session, presided over by Lord President Charles Hope (Lord Granton), ancestor to Lord Hope of Craighead, gave its decision in Strang v McIntosh 1 S 1 – the first entry in Session Cases. Emma McLarty and Stephen O’Rourke QC mark the bicentenary with a discussion of the case. The authors are greatly indebted to David Sellar QC for his insights and comments on nineteenth century mercantile law.

This year, the Scottish Council of Law Reporting celebrates the two hundredth anniversary of the oldest report series in the UK and Commonwealth: Scotland’s Session Cases. This is a major milestone and an achievement worthy of recognition.

For 200 years, Session Cases has continuously reported the key appellate decisions from the Court of Session and, from a later date, the High Court of Justiciary, together with selected first instance decisions. The reports also include decisions on all Scottish appeals to the House of Lords, the Privy Council and the Supreme Court of the United Kingdom. Since 2016 it also includes decisions of the Sheriff Appeal Court in civil and criminal matters.

Much has changed in the 200 years since Patrick Shaw published the first volume: however, there remains an unwavering commitment to the highest standards of law reporting by those in active practice at the bar.

Prior to Session Cases, the earliest reports date from the 1500s. These reports were largely in the form of practicks or dictionaries of decisions, where a brief statement of legal principal accompanied a case cited in support. The best examples are Morison’s Dictionary (covering the period 1540-1808) and Balfour’s Practicks (covering cases prior to 1540). These earlier reports tended to be drawn from notes compiled by advocates for their personal use and infrequently published.

Efforts at developing a more systematic approach to reporting appear to date from 1705. In that year the Faculty of Advocates appointed William Forbes to report court decisions. Thereafter the Faculty introduced a more regular system of reporting, culminating in 1825 with the publication of an eight-volume series entitled Faculty Decisions. Just a few years earlier, however, in 1821, advocate Patrick Shaw began editing a series of reports entitled Cases Decided in the Court of Session. These volumes were the first of what came to be known as the Session Cases. Both Shaw, and his fellow reporter James Ballantine, were in active practice at the bar. This has remained true of all Session Cases reporters to this day (and now includes solicitor advocates). Making full use of the annual Session Papers, which for centuries have been deposited in the Advocates Library, reporters would submit their work on individual cases to the editor, who then arranged publication in annual volumes. Between 1821 and 1906 the Session Cases volumes were named and numbered according to the surname of each successive editor (namely Shaw, Dunlop, Macpherson, Rettie and Fraser). Thereafter, they are simply referred to as the Session Cases.

The very first case is Strang v McIntosh 1 S 1, a decision of the First Division of the Inner House of the Court of Session dated 12 May 1821. The First Division was presided over in that year by Lord President Charles Hope (otherwise known as Lord Granton, 1763-1851), ancestor of Lord Hope of Craighead. A little more about the case follows below: however consistent with those times, the report itself runs to just two pages, while the Session Papers for 1821 provide much greater detail.

The much shorter reports of the nineteenth century contrast with modern Session Cases reports which now include catchwords, a headnote and procedural summary, cases and textbooks referenced by the parties and finally the written opinion of the court, including any dissenting opinions.

It is fitting that lead counsel for the successful petitioner Strang was the great advocate and jurist George Joseph Bell (1770-1843). Bell penned two institutional works. Firstly, there is his Treatise on the Laws of Bankruptcy in Scotland (published in two volumes, in 1800 and 1804 respectively, later developed and renamed Commentaries on the Law of Scotland and on the Principles of Mercantile Jurisprudence, published in 1810). Secondly, there is the Principles of the Law of Scotland, published in 1829. Both works, running to a number of subsequent editions, profoundly shaped the development of Scots Law. Writing in the 1820s, Lord Cockburn (author of Memorials of His Time) said this:

“Two great legal works appeared about this time - the Mercantile Commentaries of Bell and the Criminal Commentaries of Hume; works that will ever hold their places in our system. Bell’s is the greatest work on Scots Jurisprudence that has appeared since the publication of Lord Stair’s Institute. Its authority has helped to decide probably eighty out of every hundred mercantile questions that have been settled since it began to illuminate our courts; and it has done, and will do, more for the fame of the law of Scotland in foreign countries than has been done by all our other law books put together.”

Bell appears in more than fifty cases in the first volume alone, a strong indicator of his standing in the profession. Indeed, his Commentaries are often referenced with the approval of the court in those very same cases.

Bell’s opposite number, appearing as lead counsel for the respondent McIntosh, was James Moncreiff (1776-1851). Elected Dean of the Faculty of Advocates in 1826, he appeared at trial for the resurrectionist William Burke in 1828 and became Lord Moncreiff on his elevation to the bench the following year in 1829.

The case itself concerned the personal bankruptcy of a Mr McLaren. The petitioner was the Reverend William Strang, described in the petition as a “Minister of the Gospel in Dundee”. Mr McLaren, one of the Reverend Strang’s parishioners, had been tasked with arranging payment of the minister’s stipend. It appears, however, that Mr McLaren had meddled with the funds and, at a full meeting of the congregation, refused to state what the shortfall actually was. The Reverend Strang was left with no choice but to raise an action for payment against McLaren. He succeeded in that action and obtained a court decree for payment of the sum due in his favour together with his expenses. The Reverend Strang then took steps to seize and sell McLaren’s possessions in order to meet the sum due to him.

In a step which the First Division considered an attempt to defeat the Reverend Strang’s claim for payment, McLaren signed a bill in favour of his nephew McIntosh (the respondent). This bill recognised that McLaren owed a list of other creditors a total of £584, 8 shillings and 5½ pence: however, there was considerable suspicion these creditors were a sham. At first instance, the Sheriff decided this list of creditors ranked alongside (or pari passu) the Reverend Strang. Strang appealed and the case was heard before the First Division, Lord President Hope in the chair. As summarised for the petitioner:

“The question at issue is evidently of considerable importance in point of precedent. If the plea of [McIntosh succeeds] a very considerable alteration will take place upon our law, and debtors will hereafter have it in their power to defeat the diligence of particular creditors by acting collusively with other real or pretended creditors.”

The court found in favour of the Reverend Strang, stating that “the bill [in favour of McIntosh], though intended for the benefit of all the other creditors, was objectionable as a title of competition against Strang”.

Number of Court of Session cases up 13 per cent last year following 224 per cent increase in clinical negligence cases Debt cases in court fall by nearly half over past five years Montgomery in the Supreme Court: a new legal test for consent to medical treatment