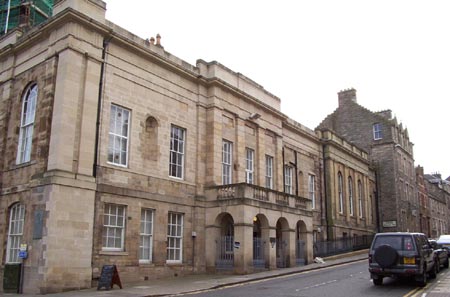 A woman who made false domestic abuse allegations has been sentenced to two months imprisonment while her mother has been handed a community payback order.

At Jedburgh Sheriff Court Sheriff Kevin Drummond QC sentenced Gayle Hunter to two months imprisonment and imposed a community payback order on her mother Elsie Hunter after the two lied that Gayle Hunter was the victim of domestic abuse by her former partner.

On sentencing, Sheriff Drummond said: “For anyone in any circumstances to a make a deliberately false complaint of criminal conduct against another person to the police is a truly wicked thing to do.

“To make such a complaint knowingly is to put into operation a course of events over which they have no control.”

Ms Hunter admitted that she lied to police and that she asked her mother to support her original lie by lying to police herself.

Ms Hunter only made her admissions after it became clear her lie was under investigation and after the victim had been detained and had spent about 16 hours in custody and had been brought before the court.

Sheriff Drummond said: “The first accused in this case, Gayle Hunter, the originator of the lie and the instigator of procuring the second accused Elsie Hunter, her mother, also to lie to the police in support of the original lie, while she now admits the lie, and which she could scarcely do otherwise in the face of the evidence, still attempts to both exculpate herself and mitigate her position by saying, and I quote, ‘…I am saying that my solicitor told me to invent a story….I would not have done otherwise.’… I note that she makes no such assertion to the author of the social enquiry report before me today.”

The judge said her evidence was “liberally populated by lies, deception, half truths and attempts to denigrate others”.

He said she painted herself as a victim of abuse and used her child “as a source to advance her personal vendetta with her former partner” by, for example, making contrasting statements to police and in evidence about her child’s welfare.

She said her former partner swore and shouted at the child in evidence whereas these details were missing in her statement to police.

The sheriff said: “The charge of which she has been convicted is a grave one. She is plainly the prime mover and her mother, her co-accused, has been caught up in the vendetta.

“The second accused, her mother, has the limited credit of eventually writing to the Procurator Fiscal to admit that she had lied: she did not do so until it was plain that the lie was unravelling. That credit is diminished if not extinguished by the fact that she restricted the admission of the lie and compounded the lie by maintaining the truth of the earlier assertion: she did so by telling a second lie.”

Sheriff Drummond noted that the Crown has faced criticism for its handling of domestic abuse cases.

He added: “It is proper that the Crown should be commended for the way in which it has investigated and presented the present case.

“It is also proper that the public should be aware that abuses such as these will be fully investigated in order that there can be public confidence in the approach which the Crown have adopted to cases of this kind.”