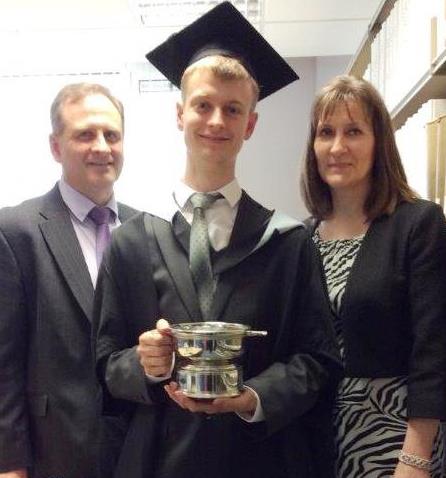 The annual University of Aberdeen prize for “Best Intellectual Property Law” related dissertation, sponsored by Cloch Solicitors, was secured by undergraduate law student James Field this month for his critical analysis of “The Patentability of Human Embryonic Stem Cell-Based Inventions in the European Union”.

The prizewinning dissertation opens with technical and moral considerations which play out in the controversy over patentability of inventions based on uses of human embryonic stem cells (hESC), as underpinned in the European Patent Convention and the EU Biotechnology Directive, before covering (1) morality in European patent law generally (2) the intersection of hESC with human rights (3) discussion on whether hESC-based inventions are consistent with European human rights laws, and (4) an analysis of the morally-problematic legal terms and whether they fall under the ambit of patent law, before concluding that whilst moral considerations certainly come under the ambit of patent law, the interpretation of morally problematic terms such as “human embryo” and its “human dignity” do not.

The Cloch IP Quaich is awarded to the student (undergraduate or postgraduate) who obtains the highest mark in the university marking, as adjudged by Dr Abbe Brown, senior lecturer and deputy head of Law School.

The Cloch Quaich was presented to James by Anne-Michelle Slater, head of the School of Law, post-graduation at the Law School prize-giving in the Law Library on 15 June.

The Cloch IP Quaich is now on display in the Taylor Law Library, in the School of Law.

The Cloch IP Quaich is one of a number of ongoing initiatives between Cloch Solicitors and the University of Aberdeen, including a fourth year participating in the University of Aberdeen Law “stream career mentoring programme”, and guest lecturing on topics such as “problems in IP practice” and ‘life as an IP lawyer’ at secondary schools, universities and business incubation centres across Aberdeen generally.