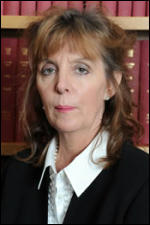 The solicitor general, Lesley Thomson QC (pictured), has said the fatal accident inquiry (FAI) into the Glasgow bin lorry crash will look at the driver’s background, technical aspects of the vehicle itself and the safety of the route taken by the lorry.

Six died and four were injured in the incident as the council’s lorry careered into pedestrians on Queen Street on 22 December last year.

The inquiry will begin on 22 July.

A preliminary hearing for the inquiry, expected to last a month, took place at Glasgow Sheriff Court yesterday.

Ms Thomson said: “The issues fall into three categories which are firstly around the driver of the vehicle, his medical background, his fitness to hold the licence, his employment record and training.

“Secondly the vehicle itself and the technical aspects, if there could have been any measures or interventions to have brought that vehicle to a controlled stop.

“And thirdly the safety of the refuse collection route taken by the motor vehicle. In relation to that I would intend to explore not just the route but the time of week and the time of year and assess the appropriateness of that route at that time of year.”

Lawyers for the families of the victims as well as the driver, the DVLA and Glasgow City Council attended the preliminary hearing.

The Crown said it was ready to go ahead while the other parties said they would have to see reports and productions before moving ahead.

Another preliminary hearing will take place on May 18.