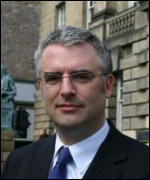 This week the SLN spotlight falls on solicitor advocate John Scott QC of Capital Defence lawyers who was recently appointed to chair the new independent Stop and Search Advisory group.

What has been your best experience as a lawyer?

I have been very lucky in my career and so there have been countless great experiences. The best was probably appearing for the first time before the UK Supreme Court in 2011. I had worked on the case solidly for several months (including on my fortnight’s holiday with my wife), I knew the subject matter inside out and I think I managed to exceed my initial aim which was simply not to embarrass myself or solicitor advocates. The atmosphere in the court was extremely friendly but it was clear that it was a formidable place.

What has been your worst experience as a lawyer?

When I was a trainee I was through in Edinburgh visiting a client in Saughton prison. When I got out I called the office (using a phone box – no mobile then) only to discover that another client had called the office about a civil case I was working on and, on checking the file, the partner discovered that I had failed to lodge something at court. By the time I got back it had been sorted out but I will never forget the sick feeling at the pit of my stomach.

Why did you choose the law?

I didn’t choose it. At some early stage my parents decided on careers for me and my 3 brothers. I was to be a lawyer, mainly because of my dad’s love of crime stories, including all the old Scottish cases like Madeleine Smith and Oscar Slater. I became a lawyer because, unlike my brothers, I failed to realise that I had a say in the matter. Fortunately the law is such a broad church that I was able to find in it an area which I enjoyed, coincidentally the same as my dad’s interest.

Who or what has been the greatest influence in your life?

My wife. She has boosted my confidence when I needed it, encouraging me to push myself on when I had doubts. At other times she has kept my feet on the ground, reminding me, among other things, that when she first saw me (she works as a Clerk at the High Court) she thought I was a long-winded idiot. She doesn’t always reassure me that her view has changed.

What advice would you give to anyone considering a career in law?

Despite the doom and gloom in most professions, perhaps especially the law, being a lawyer can be a great job. It can be fascinating, challenging and rewarding. The law reaches into every aspect of life, so almost everyone should be able to find some part of the law which would interest them as a career.

What would you want to be if you were not a lawyer?

At school I thought about writing and politics as possible careers. On reflection I am not sure what else I would be able to do if I wasn’t a lawyer. When I was at university I had a part-time job selling suits. The shop was in the Trongate, just across the road from Glasgow District Court (it is still there). At the time I left I was the top salesman, the dearest suits at the time being our luxury £39.99 range. Some of our customers were also customers at the District Court. If they avoided the jail they sometimes tried to bring the suits back.

How do you relax after work?

I am not sure if “relax” is the right word as I usually spend time playing with my two kids, aged 2 and 1. I love the sound of their laughter (not the only sound they make but the one I like to dwell on) – a simpler but nonetheless wonderful pleasure which distracts completely from the day job.

What is your favourite holiday destination and why?

I love Barcelona. My wife and I have had several great trips there, albeit before we had the kids. The food and drink are wonderful, the streets are always buzzing, and it combines city and beach in a way that few other places can offer. I have also enjoyed several trips to the Nou Camp and consider Barcelona to be my “wee team”. I have even played in a winning team at the Nou Camp complex. Some Scottish lawyers played a much younger, better-looking team of Catalan lawyers and we beat them with the help of a man-of-the-match performance by my friend and colleague Simon Collins in goal for Scotland. One of the opposing team, now a good friend, who is a lawyer in Barcelona, gave us a guided tour of the best tapas places in the city when we were over for that game. I hope to get back in the next few years.