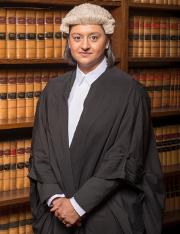 She was appointed as a part-time sheriff in 2011 and a resident sheriff at Glasgow Sheriff Court in 2014. She is a designated family law and commercial law sheriff.

She joined Maclay Murray and Spens in 1998 as a trainee, was admitted as a solicitor in 2000 and became an associate in 2003. From 2009 to 2012 she became a partner and head of litigation for Scotland in a global law firm.

She co-authored the Civil Bench Book for Sheriffs on behalf of the Judicial Institute and was appointed to the Scottish Courts and Tribunal Service Board in 2018.