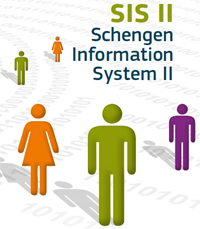 Scotland is poised to carry out a record number of extraditions as the UK gains access to a list of Europe’s most wanted criminals.

When a new EU crime database goes live today police and prosecutors intend to send people back overseas to be dealt with in their own countries as well as get more Scottish suspects back.

The number of Scottish sheriffs trained to deal with such cases has increased 50 per cent as courts expect to see an upsurge in activity.

The UK signed up to the Schengen Information System (SIS II) last year after delays caused by Eurosceptics.

Since that time the data of about 40,000 wanted criminals as well as missing persons from most of the EU have been uploaded from SIS II to the UK’s system – the Police National Computer (PNC).

From today, any police officer checking names in the PNC will check whether the person is wanted elsewhere in Europe.

David Dickson, of the Crown Office’s international co-operation unit, said there was already an increase in extraditions.

He said: “Schengen is going to make a big difference. We are already moving towards 100 extraditions a year.

“The number of cases we have going through the courts just now is the biggest we have ever had.

“There are something like 50 live cases and seven appeals.

“That may not sound a huge number in relation to the whole prosecution work, but it is a big increase and it can only rise with Schengen.”

“The Home Office estimate that there will be a tripling of the work.

“There are are now six sheriffs trained to handle extraditions, up from three or four. We are more ready to cope with Schengen.”

In its first two years, Police Scotland arrested 183 people wanted overseas – Scots and foreign nationals, with around a quarter of these arrests being made since the beginning of this year.

The single force has also managed to successfully repatriate 32 people to face trial in Scotland.

Other EU member states have been working together under Schengen for decades but the UK and Ireland opted out.

The UK agreed to remain in the European Arrest Warrant (EAW) system last year. EAWs can be issued by national judicial authorities in member states in order to get a suspect extradited.

In order for an EAW to be valid, the offence the suspect is accused of must incur a maximum penalty of at least one year in prison or, alternatively, the suspect must already been sentenced to at least four months in prison.

The UK’s membership of Schengen SIS II means Police Scotland can now see EAWs issued for all member states who have signed up.

Mr Dickson said: “The Schengen deal means that if a police officer stops a person in Cambuslang they can find out if they are wanted abroad, even if the requesting state did not know that he or she was in Scotland.

“This is not a Big Brother type of thing.

“This is a greater opportunity now for the police to protect the public by knowing who is actually here.”

The move means wanted criminals who enter the UK should be apprehended and arrested at airports.