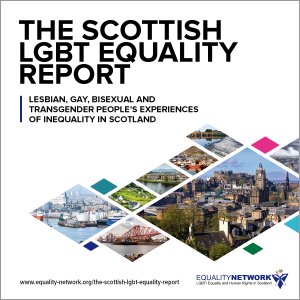 A report examining LGBT equality in Scotland has found that while advances have been made in legal and social attitudes towards LGBT people they still face widespread inequality.

The Scottish LGBT Equality Report is a state of the nation report on lesbian, gay, bisexual and transgender (LGBT) people’s experiences of inequality in Scotland.

Published by the Equality Network it is based on a survey of 1,052 respondents from across every part of the country.

The report’s findings include that 89 per cent of LGBT people believe Scotland still has a problem with inequality, and 94 per cent say that more needs to be done to tackle the day-to-day prejudice and discrimination that LGBT people continue to face.

Incidents reported by LGBT people ranged from homophobic, biphobic and transphobic comments and attitudes (82 per cent), to acts of verbal (68 per cent), physical (16 per cent) and sexual abuse (7 per cent), crimes against property (12 per cent), and discriminatory treatment when accessing services (25 per cent) and in employment (24 per cent).

In the report the Equality Network has outlined a set of recommendations on the progress needed to secure LGBT equality. It has set out some of the key changes needed to remove remaining inequalities in the law, to change social attitudes, to tackle prejudice and hate crime, and to ensure that public services and employers are meeting the needs of LGBT people.

Among its key recommendations is a call for the Scottish government to publish an LGBT equality and human rights strategy and action plan, against which progress can be measured.

On launching the report, Tom French, policy and public affairs coordinator for the Equality Network, said; “The Scottish LGBT Equality Report reveals the stark reality of the prejudice, discrimination and other forms of disadvantage that LGBT people continue to face in Scotland.

“It is clear that while we have made welcome progress in recent years there is still much more to do before LGBT people will experience real equality in their day-to-day lives.

“The scale of the challenge is considerable and with the next Scottish Parliament election rapidly approaching we will be looking to the Scottish Government, and all the political parties, to set out clear plans for how they will tackle inequality and make Scotland a fairer and more equal place for LGBT people to live.”