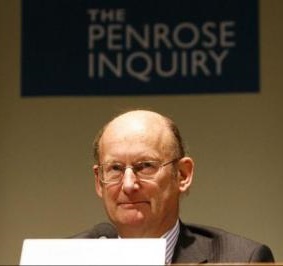 The inquiry into contamination of NHS blood supplies resulting in thousands being infected with Hepatitis C and HIV between 1970 and 1991 has recommended that anyone who received a blood transfusion before 1991 should be tested for Hepatitis C.

Scotland is the only part of the UK to hold an inquiry into the contamination which has been called the worst treatment disaster in NHS history.

Headed by Lord Penrose (pictured), the inquiry has lasted six years and cost around £12 million.

The inquiry said more should have been done in the early 90s and that patients were not properly informed of risks because of doctors with paternalistic attitudes.

It made the single recommendation that the Scottish government should take steps to offer everyone in who had a blood transfusion before September 1991 a test for Hepatitis C.

However, Lord Penrose was not present as he is seriously ill in hospital.

The inquiry was tasked with looking at how the NHS collected, treated and supplied blood.

In addition, it looked at how patients were monitored, what they were told and why they became infected.

But compensation was not dealt with by the inquiry.

A large number of the affected were haemophiliacs and the charity Haemophilia Scotland has estimated that over 500 families in Scotland live with the effects of the disaster or actually lost family members to the contaminations.

Haemophilia Scotland chairman Bill Wright said he thinks at least 5,000 people may have been infected across the UK.

He said: “In Scotland alone we estimate there are over 200 deaths. If you multiply that up to the UK then it gives you an idea of the scale of the catastrophe. There is a huge disaster right across Britain.”

Campaign group Tainted Blood said a large contingent of its members are in Edinburgh today for the launch.

It added that while the inquiry focuses on Scottish victims its outcome is of critical importance to those south of the border since the events preceded devolution and were under a UK government.

The NHS has said it attempted to protect patients to the extent possible given the emerging knowledge of Hepatitis C and HIV at the time.

The prime minister, David Cameron, said at PMQs today that it was difficult to imagine the “feeling of unfairness that people must feel at being infected with something like Hepatitis C or HIV as a result of totally unrelated treatment within the NHS”.

He added: “To each and every one of these people I would like to say sorry on behalf of the government for something that should not have happened.”