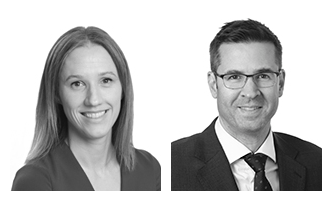 Fiona Caldow and Douglas Blyth write about an emerging development in climate litigation.

As climate activists increasingly turn to the courts in the fight against global warming, the issue of parent company liability is taking centre stage. The courts’ willingness to hold parent companies accountable for the actions of subsidiaries, combined with the rise in class action litigation, provides opportunities for both redress for communities around the world experiencing environmental harm, and for shareholder claims and activist litigation.

Claims against UK parent companies arising out of the operations of overseas subsidiaries are being given the go-ahead in the UK courts. The UK Supreme Court has considered the question of parent company accountability twice in recent years in Vedanta Resources PLC and another v. Lungowe and others [2019] UKSC 20 and Okpabi v. Royal Dutch Shell Plc [2021] UKSC 3.

Both cases provide interesting examples of the risk of parent company liability arising in an environmental context. The claims in Vedanta are brought by a group of Zambian citizens and relate to alleged toxic emissions from the Nchanga Copper Mine, owned and operated by Vedanta’s subsidiary, Konkola Copper Mines plc. The claims in Okpabi arise from oil leaks from pipelines and associated infrastructure operated by The Shell Petroleum Development Company of Nigeria Limited, a subsidiary of Royal Dutch Shell Plc, as part of a joint venture in the Niger Delta.

On both occasions, the Supreme Court held that there is an arguable case against the UK parent company and allowed the claims to proceed in the English courts. In reaching these conclusions, the Supreme Court has confirmed that the ordinary principles of negligence will apply to cases concerning parent company liability. The Supreme Court’s guidance is that the existence of a duty of care on the part of a parent company will depend on “the extent to which, and the way in which, the parent availed itself of the opportunity to take over, intervene in, control, supervise or advise the management of the relevant operations…of the subsidiary” (per Lord Briggs in Vedanta). This will always be a very fact-sensitive assessment.

A new procedure called “group proceedings” was introduced in Scotland in 2020 allowing groups of claimants with the same, similar or related claims to commence proceedings in a single action in the Court of Session, with the Court’s permission. The aim is to allow potential litigants of lower value claims to group together to litigate in a cost-effective manner. A representative party is appointed to bring the claims on behalf of a group of claimants. The procedure has been adopted by thousands of car owners in the “dieselgate” emissions action against Volkswagen.

The potential for Scotland’s class action procedure to offer redress in relation to harm caused by overseas activities is well illustrated by the recent application for permission to commence group proceedings by a group of Kenyan employees of Aberdeen-based James Finlay (Kenya) Limited. The claim is based on allegations of unsafe working practices at tea plantations giving rise to musculoskeletal injuries. Lord Weir in the Court of Session concluded that the criteria for granting that application were, in principle, satisfied. However, the claimants’ solicitors’ application to act as the tea pickers’ “representative party” was rejected, resulting in matters being put on hold until an alternative representative party is identified (Thompsons (Solicitors) Scotland v. James Finlay (Kenya) Limited 2022 CSOH 12). Unfortunately, in this first reported decision on Scottish group proceedings, the opportunity was not taken to provide guidance as to when claims would be considered to be sufficiently similar to justify the granting of permission.

The combination of the courts’ receptiveness to potential parent company liability plus our new class action capacity in Scotland may create the perfect storm in a new era of climate-related litigation.

The waters will not be easy for litigants to navigate. Success in climate-related litigation has traditionally been difficult to achieve. However, the District Court of The Hague’s decision in May last year to order Royal Dutch Shell to reduce the CO2 emissions of the entire Shell Group by 45 per cent by 2030, compared to 2019 levels, may represent a turning point. The ruling has emboldened environmental campaigners and is already prompting many “copycat” actions. The other key consideration is that much climate-related litigation is strategic with aims far wider than litigation success. Advancing action on climate change through profile, publicity and driving societal shifts are the true objectives. As the climate crisis grows in urgency, so too will the volume and range of claims.

Fiona Caldow and Douglas Blyth are lawyers at Dentons