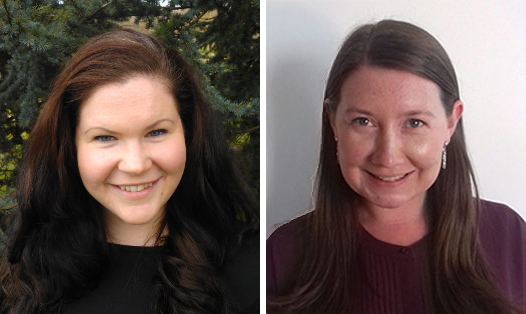 The University of Stirling has welcomed legal academics Dr Katie Boyle and Dr Michelle Donnelly to the law and philosophy division.

Dr Boyle, who has been appointed as associate professor in international human rights law, qualified as a solicitor with the Government Legal Service for Scotland (2012) and thereafter completed a PhD at the University of Limerick in Ireland (2015).

She will teach international human rights law and lead an interdisciplinary research programme on economic, social and cultural rights engaging with areas such as health, housing, food and social security. Her book on the area is due for release with Routledge Press in late 2018.

She has worked nationally and internationally on economic, social and cultural rights during periods of constitutional transition including work funded by the British Academy in Colombia and Brazil.

Her work has featured in reporting procedures to the United Nations and she has worked with national human rights institutions, including most recently with the Scottish Human Rights Commission on a project exploring the incorporation of international human rights law in Scotland. Dr Boyle led the ESRC-funded project on ‘Human Rights in Transition: Impact for the UK in a Changing Europe’ in 2016.

She is also a member of the First Minister’s Advisory Group on Human Rights Leadership. This group is independent of the Scottish government and was established by the First Minister to make recommendations on how Scotland can continue to lead by example in the field of human rights, including economic, social, cultural and environmental rights.

She told Scottish Legal News: “It is a privilege to be joining a dynamic team in Stirling law school whereworld-leadingg research and teaching is taking place. It is such an exciting time to be working on human rights research in Scotland and I look forward to engaging with colleagues across academia, civil society and the legal sector and to including the law students at Stirling in this journey.”

Dr Donnelly has been appointed as a lecturer in law. She obtained an LLB (Hons) in 2011 and a PhD in Law in 2017 from the University of Strathclyde. She has several years’ experience of researching and teaching in Higher Education.

During her PhD, Dr Donnelly acted as a teaching assistant at Strathclyde. Upon completing her PhD, she held a post as a research assistant to the Crime and Justice Research Group at Stirling.

She was subsequently appointed as a teaching associate at Strathclyde Law School where she taught across the curriculum and was awarded a Teaching Excellence Award in 2018.

Dr Donnelly has contributed to research funded by the Scottish government, Carnegie Trust and Economic and Social Research Council. Her major area of focus is the Scottish children’s hearings system, which brings together her interests in family and criminal law.

She told SLN: “I am delighted to be joining Stirling law school and very much looking forward to adding to the culture of collaboration and interdisciplinary working that exists across the university.”

Law at Stirling was ranked first in Scotland for research quality in the last Research Excellent Framework.