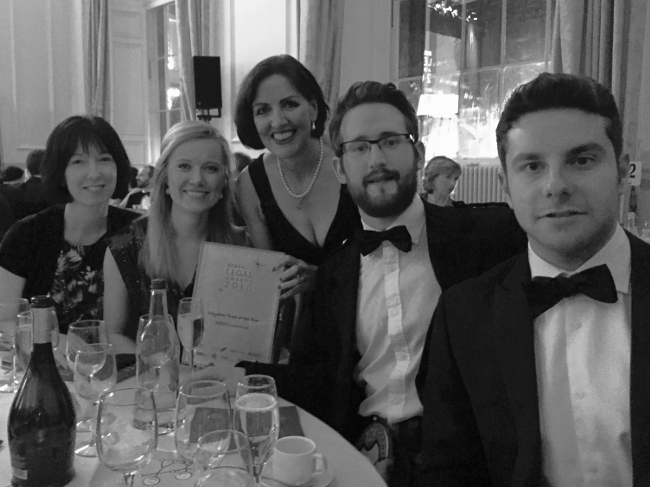 The dispute resolution team at MBM Commercial beat stiff competition from CMS, Shoosmiths, and Thompsons to win Litigation Team of the Year at this year’s Scott + Co Scottish Legal Awards.

MBM’s winning entry highlighted a series of significant accolades and victories over the past 12 months, helping to establish DR as trailblazers in the niche specialisation of claims against banks and financial institutions.

As the team has limited resource compared to its short-listed competitors these outcomes are testament to the team’s commitment, and the Carlyle case in particular, conducted speculatively in the Supreme Court, was a tremendous affirmation for the team, demonstrating DR’s ability to achieve outcomes that bely its size.

In addition the team had achieved notable press and public interest over the past 12 months, with wide-ranging publicity in the Carlyle case, including coverage on STV News and in The Herald, as well as coverage of other cases and initiatives in the Sunday Times, The Herald, Scottish Financial News and the Scottish Legal News.

Cat Maclean, head of dispute resolution at MBM Commercial said: “I am thrilled and delighted that my team has won the recognition they deserve for all their hard work and commitment over the past 12 months. It has been and continues to be a privilege to lead such an enthusiastic team with such determination and drive to succeed.”

The headline sponsor for the event, Scott + Co, Scotland’s largest collection and enforcement agency, congratulated the many winners.

Joy McLaughlin of Scott & Co, said: “Judging by the many and detailed entries we received this year, there is rising confidence in the Scottish legal market which continues to report rising fee levels and increasing numbers of staff. It is a pleasure to play an important part in rewarding this important sector with an annual awards ceremony which is highly respected by those in the sector and which delivers a welcome confidence boost to individuals, teams and firms.”