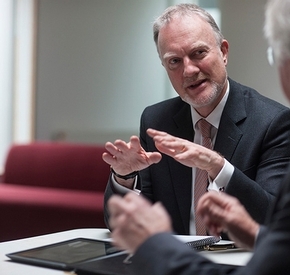 The Auditor General’s recent report on the construction of two CalMac ferries identifies various failures. One critical aspect is the breakdown of relationships between two of the main protagonists, CMAL, the Scottish government-owned ferry purchasers, and FMEL, the ferry builders, alongside failure to implement the available dispute resolution mechanisms.

An earlier report by the Scottish Parliament’s Rural Economy and Connectivity Committee found evidence of tension, poor communication and, when there were spiralling cost overruns and delays, a deteriorating relationship between the key players which eventually broke down completely. It heard that people could not sit in the same room to have a constructive discussion or sign off on agreed contractual changes, so “things just came to a complete standstill”. The committee reported “complete hostility and intransigence” and the suggestion that “the failure to achieve sign-off of the basic design of the vessels during the construction phase of the contract and consequently to make proper progress with the construction of the vessels was a direct result of the poor relationship between CMAL and FMEL”.

These are exactly the circumstances in which experienced mediators around the world assist disputing parties to resolve seemingly intractable differences. It seems a shame – and a potentially huge cost to the taxpayer – that mediation was not tried here.

The committee thought so and expressed the view that “a process of mediation should have been pursued much earlier and more proactively by CMAL and the Scottish government given both the strength of their concerns and their respective responsibilities as contract owner and project sponsor”.

More generally, the committee was concerned that the various dispute resolution mechanisms available under the contract “were not exhaustively utilised”. It called for stronger provisions on the application and enforcement of such mechanisms to be incorporated as a priority into any future contracts of this nature, including an appropriate mechanism for a mediator to be appointed. One hopes that these provisions have been introduced in the latest, nationalised, stage of construction.

It is instructive to explore this further. The Auditor General’s report tells us that, for various reasons, CMAL and FMEL did not use the dispute resolution mechanisms available to them. In fact, we are told that: “the contract included a three-stage contract dispute resolution mechanism: Mediation, Expert Determination, and the Court of Session in Edinburgh. In August 2017, FMEL requested that CMAL and FMEL enter mediation. Over the next few months, CMAL and FMEL agreed the draft terms of mediation and identified a preferred mediator. But, in February 2018, both parties abandoned the mediation attempts after failing to agree the terms of reference.” This itself is a curious situation and suggests that the parties were approaching mediation as they would the more formal process of arbitration.

We are also told that the “Scottish government and CMAL requested on several occasions that FMEL pursue its claim in court. FMEL stated it was not practical to do so as this would have stopped work on the vessels and led to substantial redundancies.” The fact that parties would insist on going straight to court, with all the delay and expense this entails, suggests reluctance to engage in negotiation. Mediation, which is essentially assisted negotiation, does not preclude court action but it does offer the opportunity to avoid its associated delay and expense by informally exploring options, alternatives, costs and realistic outcomes, along with addressing relationship issues. All of this can be done relatively quickly.

We obtain a fuller understanding of what was going on in the Rural Economy and Connectivity Committee’s report, which reveals that, in CMAL’s view, the size of the claim for additional costs was such that… “the only reasonable mechanism for resolving the matter was through the courts.” The Committee was told that CMAL was “unwilling to engage in a negotiated settlement of the dispute between it and FMEL” and that such an approach to resolve matters had been “completely rejected by CMAL”. If so, that appears an expensive approach to adopt. With more constructive engagement, all of this just might have been resolved years ago.

A question arises: has such an approach been taken more widely in public sector contractual disputes in Scotland in recent years? This could suggest lack of understanding of, or perhaps resistance to, what can be achieved through negotiation with or without the assistance of a mediator. Indeed, it has been observed that some public sector officials would prefer that a third party such as a judge or arbitrator rules on a dispute, rather than assume the responsibility themselves for making decisions, for fear that they may subsequently be criticised, even if that means the resulting process and outcome is more costly. Perhaps this should be explored further.

Looking at this broadly, one of the lessons to be learned about public sector procurement in Scotland is the need to have and use robust processes at an early stage to try to resolve the disputes which inevitably arise in complicated contracts. Nip it in the bud. Around the world, constructive dispute management, involving independent mediators to assist negotiations, regularly saves disputing contractors tens (sometimes hundreds) of millions of pounds of unnecessary expenditure in major projects. It has done so in Scotland in the past. That could have been the case with these ferries. This issue deserves serious consideration by the Scottish government and by all those with a stake in such large contracts in Scotland, especially where significant amounts of taxpayers’ money are involved.

This should be a core aspect of good contracting, risk management and effective governance. Indeed, this could be a missing and yet crucial piece in the latest National Economic Strategy for Scotland. Cut the cost of disputes, prevent them from escalating and you turn wasteful expenditure into productive investment. And dealing with disagreements and disputes quickly and efficiently is also an environmentally friendly choice. It fits with building a greener economy and with aspirations to meet sustainable development goals. It might even have delivered two ferries before now.

John Sturrock QC is a mediator. This article first appeared in The Scotsman.