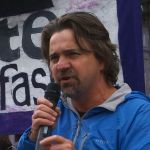 Attempts to investigate reports of asylum seekers being denied food and living in poor conditions at a Scottish detention centre have been blocked by the Home Office.

The Scottish Trades Union Congress (STUC) requested a visit to Dungavel Immigration Removal Centre in South Lanarkshire but was refused permission by the Home Office.

Deputy general secretary of the STUC, Dave Moxham (pictured), said the manager of the centre was “perfectly happy” to allow them access but that the Home Office refused.

Mr Moxham said: “there are things going on in that centre which at the very least they don’t want a light shone on”.

“We had reports some weeks ago that a number of detainees were refusing food, and a range of other scattered reports that all was not well in the centre.

“We spoke to a range of members of society and religious organisations and we thought: why is it not a useful thing for us to go and establish whether those reports are true or not?

“We believe that it is important that people look outwith the workplace and look at wider society, and ask themselves the question: are we treating people with humanity, are we happy with the way that we are running our society?

“Civil society organisations and visiting organisations go into prisons all around Scotland. It is widely accepted that wider Scottish society and wider UK society has a legitimate interest in looking into how the prison system – and in this case a detention system – operates.”

He added: “Eight years ago the STUC visited Dungavel when it was first set up, we discussed the conditions in it, we made some recommendations and at that stage people were perfectly happy that we should do that.

“The question is: why are they not happy that we and other religious organisations shouldn’t go in now?”

He suggested the Home Office would prefer for activities at the centre to go unscrutinised.

“We have people in Dungavel that have been there for over a year, that wasn’t the purpose of the centre when it was first constructed, and they know that there are things going on in that centre which at the very least they don’t want a light shone on.”

A spokesman for the Home Office said yesterday: “We can confirm a request to visit Dungavel was received and subsequently declined. It is understood the number of detainees eating set meals at Dungavel remained at normal levels throughout March. A handful of individuals who refused set meals confirmed they were eating in their rooms.”