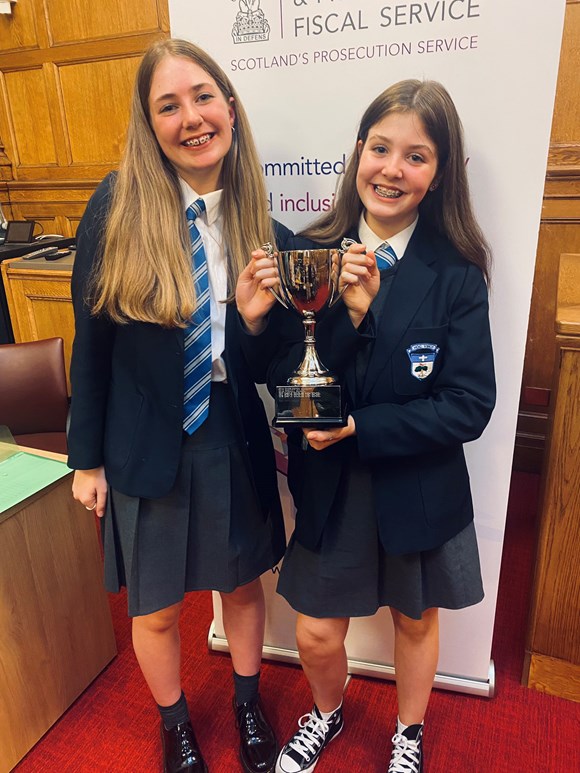 Mairin Campbell-Thow and Rose Usher, both 13 and in S2 at the Glasgow school, teamed up to triumph in a keenly contested final at a packed court in Parliament House in Edinburgh last week.

They emerged victorious after going head-to-head with teams from Edinburgh Academy and Hamilton Grammar on the topic: “If you were the Equalities Minister for Scotland what is the first piece of legislation you would introduce and why?”

This years’ competition involved 104 pupils from 38 schools across Scotland.

Presenting the trophy to the winners the Lord Advocate, Dorothy Bain QC, said: “Congratulations to all who took part in this year’s competition.

“Mairin and Rose have triumphed in the final but the standard of debate and presentation we have heard throughout the competition has been a real testament to the passion and skills of the young people who have taken part.

“It has been a pleasure to see pupils come together in the spirit of friendly competition to develop confidence in their public speaking skills and engage in spirited debate addressing important issues relating to diversity and equality.”

Ms Bain was asked what guidance she would have given her 13-year-old self. She said: “Don’t think that your potential and your ability is restricted or determined by your social or economic circumstances. With hard work, commitment and self-belief you can genuinely achieve what you want to in life.

“Mindset is critical to achieving the success you wish for. Think why you can do something rather why you cannot. Approach your future on the basis that it is not where you come from but where you are going that matters.”

Commenting on their victory, team coach Craig Charlick said: “I am delighted that Mairin and Rose won the competition as it is a reward for their own efforts over many years, and pays tribute to everyone who has helped them get to this point.”