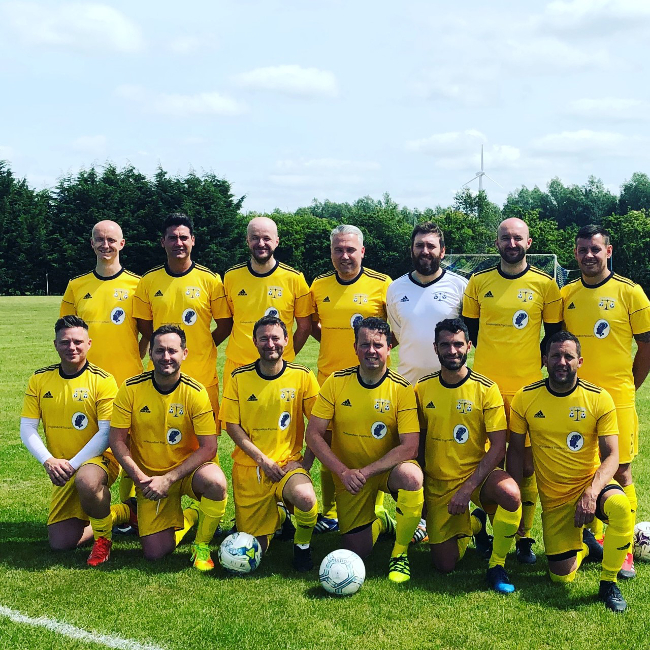 The Glasgow Bar Association’s self-proclaimed ‘Golden Generation’ of footballers travelled to Ballymena in Northern Ireland on Saturday 23 June to play a friendly match with Ballymena Utd as part of their ‘Peace & Goodwill Tour’ 2018.

The team’s first overseas trip in nearly three decades saw the usual mix of established court practitioners, invited guests and others who were just glad to get away from their wives for the weekend.

Tour captain, Craig Dewar, overcame the early embarrassment of handing over the worst team pennant in football history before the game to claim the man-of-the-match award in a closely fought affair where the hosts ran out 2-1 victors.

‘The Bar’ set up with an uncharacteristically defensive 4-5-1 formation after manager Ross Yuill resolved an unprecedented selection headache by actually having more than 11 men to choose from. Early exchanges saw the local team carry most of the play and create the better opportunities until the ‘Rossanaccio’ tactics appeared to pay dividends when the ever industrious Leon Kondol headed home an excellent goal after a rare Bar foray into the Ballymena half.

An enthralling battle was then played out on what appeared to be the warmest day in the history of Irish sport. Indeed, such were the conditions that the referee ordered water breaks midway through each half in order that the visitors could flannel down their ‘moobs’ to avoid any unnecessary chafing injuries.

Despite the difficult playing conditions there were a number of good to average performances in the Bar side. Andrew Phillips looked good at outside right (but then he always does). Richard Hill and Joseph Stewart represented the Crown Office and Procurator Fiscal Service with distinction while midfield general Paul Mullen uncharacteristically avoided disgrace on this occasion. Resident outside-left-half-forward Ross Yuill was deployed in his usual bespoke position though unusually threatened to involve himself in the play on more than one occasion.

Man-of-the-tour Ryan Sloan played well in midfield and endeared himself with the locals afterwards so much so that initial talks have begun to rename the nearby ‘George Best Airport’ after Stranraer’s favourite son.

Unfortunately, The Bar couldn’t maintain their first half impetus and lost two second-half goals to a spirited home side whose post-match hospitality and kindness will be remembered more fondly than the football game itself.

A return match is scheduled to be played in the coming months.