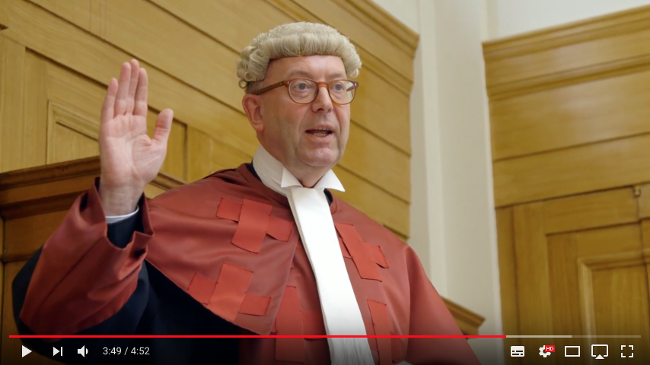 A new film which aims to encourage diversity, bust myths and encourage new recruits to the legal profession is being released this week

The Faculty of Advocates has released a short promotional film documenting the moment when trainee advocates, known as Devils, graduate to the bar.

The film follows a day in the life of trainee advocate, Kirsty Tyre, as she makes the leap from Devil to Advocate.

Dean of Faculty, Gordon Jackson QC, commissioned the film from Edinburgh-based production company Freakworks. The film will be distributed to law students across the country to ensure that the Faculty continues to attract the best legal talent to a career at the bar after completing training. It will also be sent to qualified solicitors who might be considering a career move to the Bar.

Mr Jackson said: “We made the film because we want to bring the Faculty of Advocates to a new audience and inspire more legal talent to join the profession. Members of Faculty come from a broad cross-section of society, and we’re keen to bust any myths people may have about advocates or access to the profession. We want to encourage everyone who is interested to come a step closer to us.

“The diversity amongst our members is a reflection of the country we live in today, and I am keen that we expand on that diversity every year.”

Ms Tyre said: “The intellectual challenge, the variety of work that you are able to do as an advocate was appealing. You can take on all sorts of work, rather than potentially being restricted to one area. And I like that you’re self-employed as an advocate, I quite like the idea of the flexibility.”

The Faculty of Advocates, based in Parliament House, Edinburgh, ensures that the people of Scotland, regardless of wealth, background or location, have access to the very best independent, objective legal advice. It has been at the forefront of legal excellence since 1532 and regulates the training and professional practice, conduct and discipline of advocates.