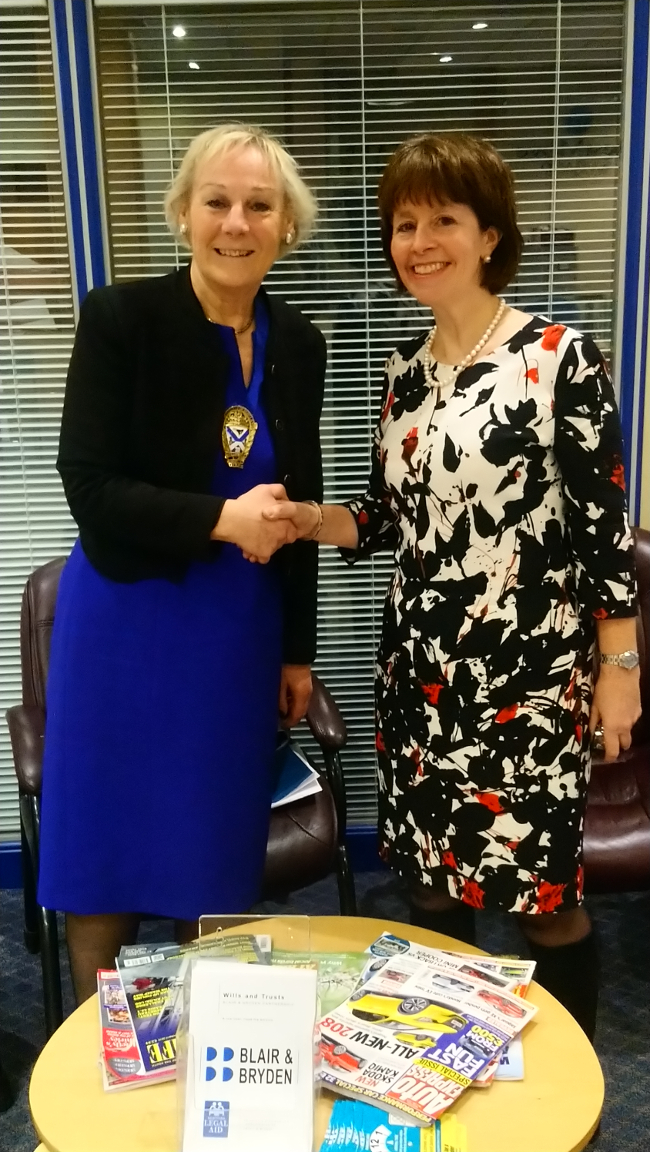 Greenock solicitors are to have their first female dean of the town’s faculty of procurators.

Jill Carrick was appointed dean of the Faculty of Procurators in Greenock, the first woman to take up the post in the organisation’s 200-year history, at the faculty’s annual general meeting (AGM) yesterday.

Ms Carrick, a partner at Blair and Bryden, is accredited by the Law Society of Scotland as a specialist in family law. She has worked in the town for 36 years and has extensive experience in child law cases, adoptions and children’s hearings as well as advising couples going through separation or divorce.

She said: “The Faculty of Procurators in Greenock has a long history, obtaining its charter in 1816 following a sheriff court being established in the town.

“It’s a real honour to be the first woman to become dean of the faculty, particularly this year which marks 100 years of women in law. I’m very much looking forward to taking up the role and to ensuring that the faculty can support all of its members in the area. I’d like to thank Alasdair Hendry, for all of his hard work as dean of the faculty over the past year. He has been a great support for many of us and I hope to be able to do the same for our members as I take up the role.”

Alison Atack, president of the Law Society, who attended the AGM, said: “I’m delighted for Jill. Local faculties play a key role in supporting those working in the legal profession, providing networking opportunities, as well as training and professional development.

“This year is a special year for the Scottish legal profession for two reasons. 2019 marks the Law Society’s 70th anniversary and we will be celebrating the contributions solicitors make to our society – from supporting individuals at critical times in their lives to providing the expert legal advice local businesses need.

“This year also marks 100 years of women in law. The first woman to become a practising lawyer in the UK was Madge Easton Anderson, who gained a law degree at Glasgow University before starting a three-year apprenticeship in 1917 in the city. In 1919 the Sex Disqualification (Removal) Act was passed, allowing women to become law agents for the first time, meaning she became the first woman lawyer in the UK. She led the way for women joining the profession, with currently just over half of all Scottish solicitors now women.

“Jill’s appointment today as dean of the faculty in Greenock represents another step on the equality and diversity road.”

The ‘writers’ in Greenock were united into a society, by the name of ‘The Society of Writers in Greenock’. When a branch of the sheriff court was established in town, the group obtained a Charter, or Seal of Cause, from Sir Michael Shaw Stewart in January 1816, under the name of ‘The Faculty of Procurators in Greenock’. The faculty, which has over 50 members, runs seminars on legal matters and hosts a number of social events, including its annual dinner, for members and staff from Greenock Sheriff Court.

To mark International Women’s Day, the Law Society of Scotland is working with the First 100 Years project about women in law and has organised a drop in photography session at its Edinburgh offices on Friday, 8 March, inviting women the Scottish legal profession to have their photo taken as part of a special UK-wide project. There is no need to book an appointment and the drop in session is open from 9.30am to 4.30pm.