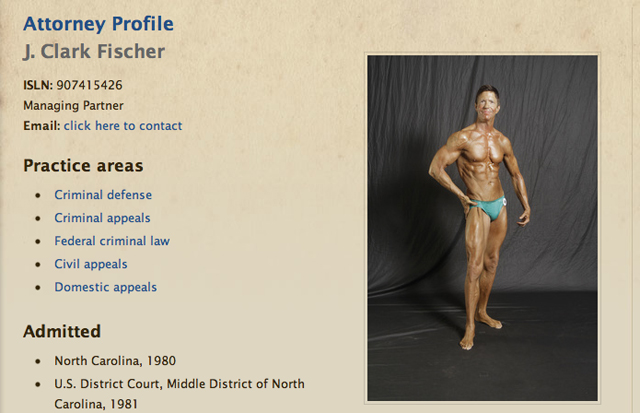 An American lawyer has dispensed with the usual corporate profile photo in favour of something different.

North Carolina lawyer J Clark Fischer of the firm Randolph & Fischer is a “competitive bodybuilder and physique athlete” and wants prospective clients and other lawyers to know it. Perhaps Scot lawyers should follow suit.

In a recent court case a Scot accused of stealing over £700,000 worth of Faberge antiques, when asked his name, told the court that he was John F. Kennedy’s assassin Lee Harvey Oswald.

He also demanded a cup of coffee.

Richard Tobin, 45, appearing at London Southwak Crown Court was accused of stealing the rare items from an auction house in London.

But when asked his name he replied that he was Lee Harvey Oswald.

He is alleged to have stolen various of the famous trinkets made by the court jewellers of Imperial Russia from Christie’s auction house.

Judge Alistair McCreath replied dryly: “The gentleman has informed us that he is Lee Harvey Oswald, but I don’t think that’s right somehow.

“I expect we can proceed on the basis he is Mr Tobin.”