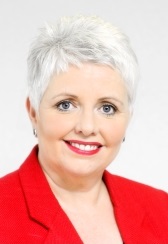 Solicitor Carol Fox, of Fox and Partners (pictured), has written about becoming a single mother through IVF treatment in the 1990s in her new book Memoirs of a Feminist Mother.

Carol, 55, who recently won millions in equal pay for female workers from North and South Lanarkshire councils, relates how a doctor told her to find a husband when she sought his help for fertility treatment.

However, she was not dissuaded and headed south of the border in 1992 to give birth to her daughter, Natasha.

Her new book is written to her daughter as an expression of her love and as a reminder of the struggle women undertook for the right to choose.

In 1999 she made history by becoming the first single mother in Scotland to receive fertility treatment as she attempted to have a second baby.

Carol had 29 cycles of treatment between 1990 and 2001. It took 12 before she was able to have Natasha but was unsuccessful in having another baby after 17 more.

Of 49 embryos, one successfully became a baby.

The battle to have another baby began for Carol when she found out she had ovarian cysts and felt the window for having another baby was closing.

While Scotland would not permit fertility treatment for single women, clinics in England would – but only with a letter of referral from a doctor.

In a tense meeting with a consultant at Monklands Hospital in Airdrie, he told Carol, then 29, he was not in the “habit of referring single young women to clinics to get themselves pregnant out of wedlock”.

Carol travelled south and persevered until one clinic agreed to help her.

But the journey to motherhood was an arduous one – filled with disappointment and debt.

She said: “I was often low but I refused to quit. It felt like an agonising roller-coaster, with high peaks of excitement and deep ravines of despair in the space of a few weeks.”

She said: “I had finally become a mother. With all the hostility and doubts that I had encountered along the way, I resolved not to waste any time doubting myself but resolved to be the best mother I could be.”

Despite its challenges Carol never regretted her decision and loved motherhood.

She became a union official and, after a few more years down south, moved back to Scotland to raise Natasha in Edinburgh.

At 40 she undertook the accelerated LLB.

Her legal battles have seen her win life-altering sums of cash for low-wage workers – including dinner ladies and cleaners who earned thousands less than their male colleagues.

Carol continues to fight for womens’ rights as director of her eponymous law firm.

She said: “My focus was always on the women and, for me, it was feminism in action, delivering real money to many thousands of real low-paid women.”