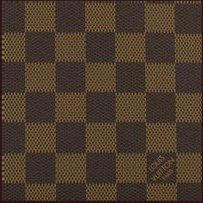 The General Court of the European Union as cancelled two community trademarks registered by Louis Vuitton because the square pattern is not distinctive enough.

The court has now ruled that the chequered pattern has “no distinctive character”.

The full ruling states the court’s opinion that “the chequerboard pattern, as represented in the contested trade mark, was a basic and banal feature composed of very simple elements and that it was well-known that that feature had been commonly used with a decorative purpose in relation to various goods”.

Louis Vuitton was challenged to prove that people across the entire EU would relate the chequerboard marks to its products but was unsuccessful in doing so.

The challenge was brought to the court by German-based retailer Nanu-Nana.

Sharon Daboul, trademark attorney at intellectual property law firm EIP, said: “This trademark loss is a double-blow to Louis Vuitton, who has been fighting to protect these marks since 2009.

“It can no longer claim to have a monopoly on the chequerboard pattern as applied to leather goods and bags, even if it was the first to come up with it.

“This loss might make it harder for the company to protect its bags against competitors or counterfeiters in the EU as it will no longer be able to rely on its trademark registrations.

“It also serves as a warning to brand owners that trademark registrations are not safe from challenge.

“An essential function of a trademark is to serve as a badge of trade origin.

“Trademarks must have distinctive character and a trademark loses its ability to be distinctive if it becomes commonplace in the trade; this can be as a result of the acts, or inactivity of the brand owner.

“If a trademark is allowed to become commonplace such that it can no longer distinguish a product from competitors, its value is lost and a pro-active third party can apply to cancel it.”