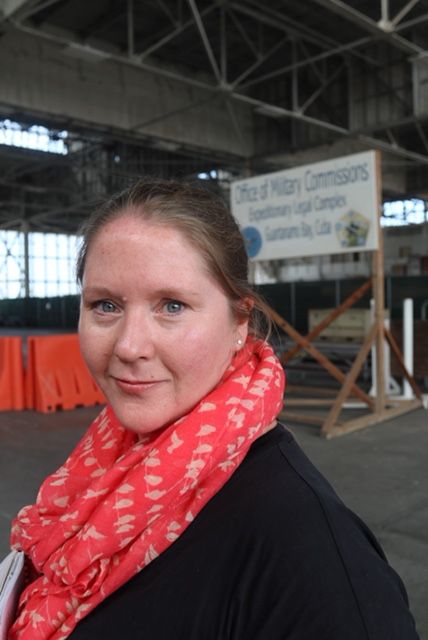 Dr Kasey McCall Smith is a senior lecturer in public international law at Edinburgh University. She first travelled to Guantánamo Bay Naval Station in 2016 and has returned nine times since as part of a project examining the effects of torture on fair trial rights.

In 2017 I wrote a piece for Scotland on Sunday giving a glimpse inside Guantánamo and the prosecution of the so-called mastermind of 9/11. The case is being tried as a military commission, a rarely used, special, military court designed specifically to prosecute individuals linked to al Qaeda or anyone committing hostile acts against the US or any of its coalition partners that, according to the US, does not benefit from law of war protection. Closely following the military commissions since 2016, my research considers why democratic societies must work hard to stay the course set by the rule of law – even when our emotions suggest otherwise.

Little has changed at Naval Station Guantánamo Bay, Cuba, since my first visit in June 2016. The naval station continues a steady rotation in its population of active service personnel. Third country nationals from the Philippines and Jamaica continue to deliver most of the unskilled labour on behalf of military contractors. Jamaicans keep the johnny-cakes, curried pork and flash fried red-snapper coming at the best (and only) outdoor food stall on the small patch of US-controlled Cuban territory. ‘Rasta Hill’ is a study in culinary entrepreneurship and industry as well as a reflection of the discipline and respect that characterises the US military base. With reggae tunes blasting across the tin panels of the hut, the proprietors cut the pumping music with split-second precision as the tannoys spring to life across the base. Off-duty military and civilians alike are silent and respectful as the traditional musical arrangement ‘Retreat’ signals the close of another day.

The most noticeable differences take place a short distance away on ‘Camp Justice’, home to the multi-million-dollar purpose-built military commission courtroom facility. If all goes to plan, in January 2021 the jury selection will begin for the 9/11 trial – the largest criminal justice trial in US history. But that is a big ‘if’.

Despite recent infrastructure improvements, the military commission facilities that make up Camp Justice have been in a state of decline for years. Though the high-tech, prefabricated offices and courtroom facilities that form the Expeditionary Legal Complex were only opened in 2008, persistent mould, leaks and plumbing issues often cause the closure of parts of the complex. Other facilities, such as the former aeroplane hangar that sits adjacent to the media operations centre, have been declared off-limits due to problems with the ageing structure. A reflection of the failure of the government to acknowledge the gravity of the wrongs committed in the early years of the US war on terror permeates everything at Camp Justice. Extraordinary rendition to secret detention facilities - black sites - run by the CIA, the torture of countless individuals and the detention of hundreds of men for years without any legal recourse all characterise the first few years of the so-called ‘war’. But for the serious missteps taken in its torture programme and the efforts to hide them, a judgment would have no doubt been delivered years ago giving closure to the thousands of victims’ family members in the US and across the globe. Much like the paint flaking off the condemned aeroplane hangar near the court, defence lawyers are methodically chipping away at the national security barrier the government constructed around the CIA torture programme. The last months of pre-trial hearings have presented a very clear picture of at least one thing – the defendants were tortured. Relentlessly. With the knowledge of many state agents. And prosecutors have no interest in addressing this massive elephant in the room.

Scotland seems far away from the military commissions, black sites and torture. Yet declassified documents reveal that the seed for the interrogation techniques was sewn in part in Scotland. After he helped to prosecute Nazis at the Nuremberg trials, Bridge of Allan-born psychologist Ewen Cameron developed mind-control techniques – including sensory deprivation, drug use and prolonged exposure to audio loops, known as “psychic driving” – that were used on harmless patients under his care in Canada. His work on behalf of the CIA eventually became part of what the US referred to as enhanced interrogation techniques. The rest of the world calls it torture.

In January one of the two architects of the CIA’s torture programme, Dr James Mitchell, confirmed that to develop the programme the US pulled additional techniques from what it considered its most lawless nemeses across the past century. Mitchell was one of two psychologists whose company was paid $81 million by the CIA to develop the brutal torture programme and administer interrogations across most of its black sites in the years after 9/11. In addition to being board certified psychologists serving the military, both he and his business partner Dr John ‘Bruce’ Jessen graduated from the US Survival, Evasion, Rescue and Escape (SERE) school where elite military service members are exposed to a range of techniques that were considered illegal prior to 9/11, including those techniques developed by Cameron. His role in developing torture techniques was the feature of Stephen Bennett’s documentary Eminent Monsters: A Manual for Modern Torture, which is currently on release in selected cinemas in conjunction with the anti-torture organisation Reprieve.

Would you drown a person if your country asked you to?

This is the essence of the question that Mitchell answered ‘yes’ to. Having spent years as a psychologist working in crisis situations, he testified that after 9/11 ‘the gloves came off’. On the stand in Guantanamo for over nine days at the 40th round of military commision pre-trial hearings - the largest criminal trial in US history - Mitchell showed no remorse as he explained in detail how he and others interrogated high-value detainees suspected of having knowledge of future attacks on the US. No lawyers, no investigation, no trial. Just punishment. The only protection was the doctor in the room counting down the seconds until the waterboarding could stop. US bureaucrats determined that 40 seconds was the maximum duration for a single ‘pour’, unless the detainee convulsed from drowning. In Mitchell’s words, interrogations were based on ‘hard justice’ but ‘justice nonetheless’.

But is this type of brutal treatment really justice? And if it is, surely it’s not very far from the indiscriminate torture and killing which the war on terror claims to be fighting? As the pretrial phase of the 9/11 case fast-approaches its eighth year, torture seeps into every aspect of the trial.

Last autumn, prosecutor Bob Swann shocked the court with a Freudian slip that encapsulates the Guantánamo military commissions. While attempting to craft what seemed a standard, if not pleasant, picture of the detention facilities he asked a former Camp 7 commander if the detainees had a ‘button to press for waterboarding…err water bottles’. Camp 7 is the top-secret facility in which all high-value detainees are held, including the five 9/11 defendants. In January Mitchell told the courtroom that at least one defendant, Ammar al Baluchi, was used as a ‘training prop’ – an educational tool for the next generation of enhanced interrogators. With clinical dispassion he explained how he slapped, bounced defendants against a wall (walling) and waterboarded the alleged 9/11 ‘mastermind’, Khalid Sheikh Mohammad, repeatedly and with little resistance from the defendant. Not surprising in light of the fact that the Mohammad was also sleep deprived, in some instances up to 180 hours, as part of the torture programme Mitchell and Jessen custom designed. His testimony conveyed his self-perceived hero role for each of the 183 instances over a three-week period that he and Dr Jessen poured two-litre bottles of water over the defendant’s cloth-covered mouth and nose. His stoicism was periodically broken by impassioned claims to have been ‘doing it for them’, pointing to the 9/11 victims’ family members observing the trial.

Who really cares about torturing terrorists? We all should.

Behind the US, the UK suffered the greatest loss of life on 9/11, more than in any terrorist attack on British soil. Every attempt to hide what happened in the torture programme only further delays a judgment. Though a conviction may bring some peace to those who lost loved ones on 9/11 or in the subsequent years of the war on terror, it is our democratic duty to consider the costs. More than 700 men were renditioned and held in Guantánamo for years without charge for even a petty crime, much less terrorism. Many came by way of one of the infamous CIA black sites, where torture and ill-treatment prevailed. These truths should be faced head on.

The ability of a legal system to work even when passions run high is the foundation of a democratic society. The almost eight years of pre-trial in the 9/11 case show that when a country ignores its own laws, everyone suffers. Like the deteriorating infrastructure of Camp Justice, the inconvenient truths about the US torture programme destroy a bit of the system it was designed to protect a little more each day.

Eminent Monsters: A Manual for Modern Torture is in selected cinemas now. A screening at the Filmhouse in Edinburgh on Saturday 7 March will be followed by a Q&A with director Stephen Bennett and Dr McCall-Smith. See www.filmhousecinema.com for details. This article first appeared in The Scotsman.