David J Black: We’ve got to talk about David and Henry, but not quite yet

Editor’s note: All animals are cancellable, but some are more cancellable than others. That is the inference to be drawn from the manner in which we pick and choose history’s villains. David Hume is out but Marie Stopes, eugenicist and admirer of Adolf Hitler, is apparently in. Edinburgh Council has failed to reply to my inquiries about the late Nazi sympathiser’s Abercromby Place plaque, preferring total silence instead. And David J Black’s suggestion to erect a statue of William Fergusson opposite David Hume Tower as a “gesture of reproach” – like Gandhi before Churchill in Parliament Square – was ignored by Edinburgh University principal Peter Mathieson. Fear and ignorance abound.

Nothing is more terrible to behold than ignorance in action, according to Goethe, and certainly when inaccurate and misleading guff is offered up as fact a little something in us should die. Apropos which, fond as I am of journalist and raconteur Lesley Riddoch, who speaks and writes with a feisty passion, I began one of her recent Herald articles with just a smidgin of trepidation.

‘Why has Scotland not had a Colston moment?’ blasted her headline, as though we were all guilty of some shameful omission for failing to overturn a few statues and monuments. As I recall, she then lamented the total lack of effigies of women in Edinburgh. Sure, they are in pretty short supply (except for Queen Victoria, who has an oversupply of at least three), but it’s simply nonsense to say there are none.

For starters, there’s a superb bronze half-figure dating from 1918 of Dr Elsie Inglis by the Croatian sculptor Ivan Mestrovic which ought to be better known. Then there’s a Queen Margaret of Scotland and a Margaret Tudor, consort to James 1V, on St Giles, and a Mary Queen of Scots on the Scottish National Portrait Gallery. There’s also a remarkable memorial designed by Fettes College architect David Bryce to the novelist Catherine Sinclair, but since she was a member of a family which had once had interests in Caribbean plantations she probably shouldn’t be mentioned. 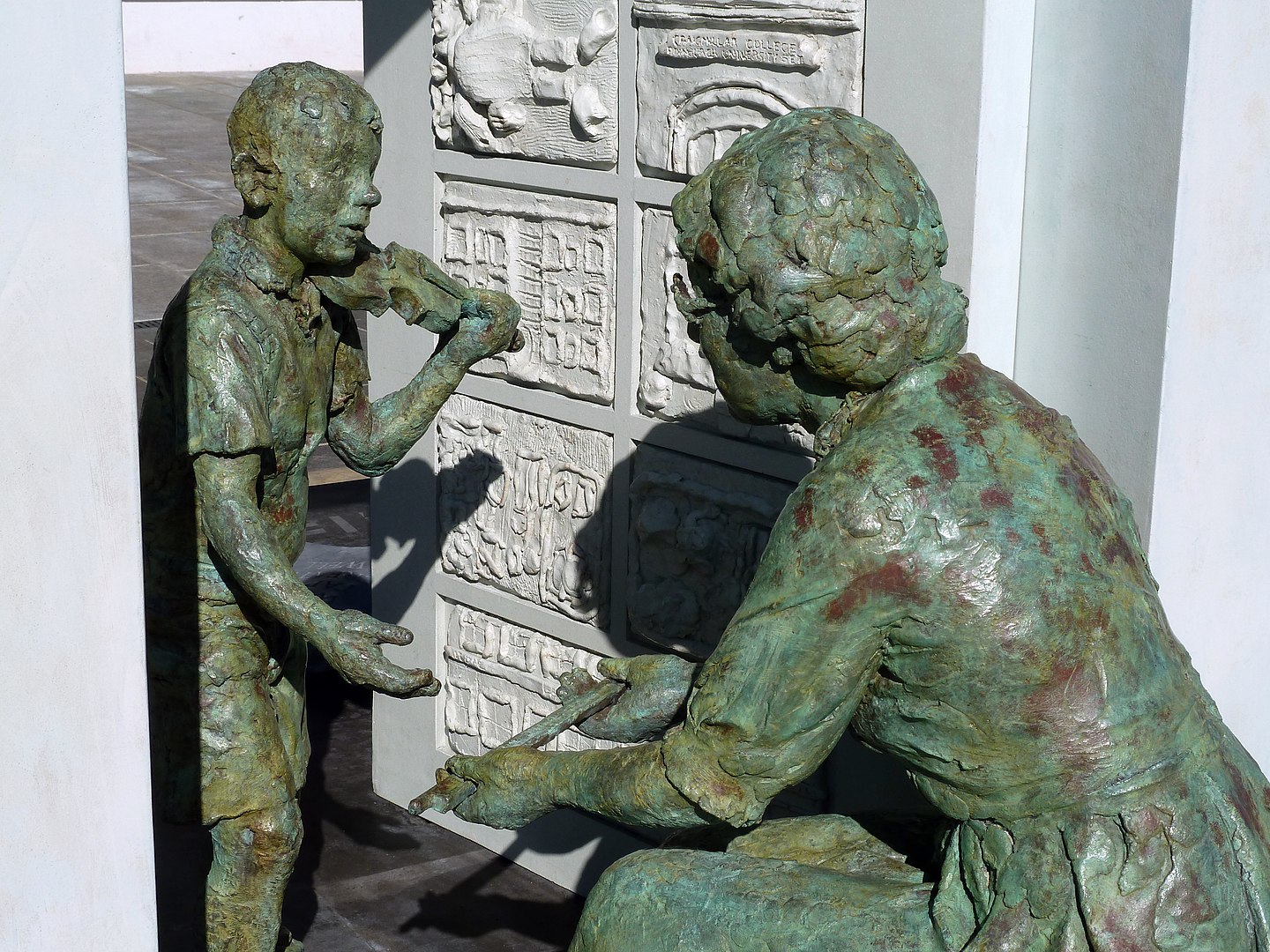 For those who eschew royalty there’s a bronze statue of my dear old aunt, Helen Crummy, founder of the Craigmillar Festival Society and social reformer, outside the local library on Niddrie Mains Road. One might even precociously argue that the female supporter on the city’s armorial bearings, a reminder that the area up by the castle was once known as ‘Castra Puellarum’, or the maidens’ encampment, is a nod to the distaff, even if she is blessed by no name other than Edina.

In addition to this, there were around 18 plaques to ‘Women of Achievement’ scattered around town in the mid-1990s, including one to the eugenicist and admirer of National Socialism, Marie Stopes, already mentioned in this parish. Six of these, it seems, have mysteriously vanished, including the one celebrating Nationalist Patriot Wendy Wood formerly at Edinburgh’s old Royal High School.

This famously caught the attention of the late Donald Dewar when, as Tony Blair’s Scottish Secretary, he was being shown around what by then was New Parliament House, after it had been refurbished as a Scottish Assembly Building. A well-placed witness to the minister’s hissy fit is still of the opinion that this was definitely the reason Mr Dewar over-ruled Thomas Hamilton’s masterpiece and we ended up with the melange at Holyrood which notched up a world record breaking budget over-run and helped in the slow evisceration of Scotland’s Labour hegemony. On the other hand an elderly nationalist once assured me that the lovat tweed clad patriot was herself in the employ of the British security services, so perhaps it’s just as well she’s been decommissioned. 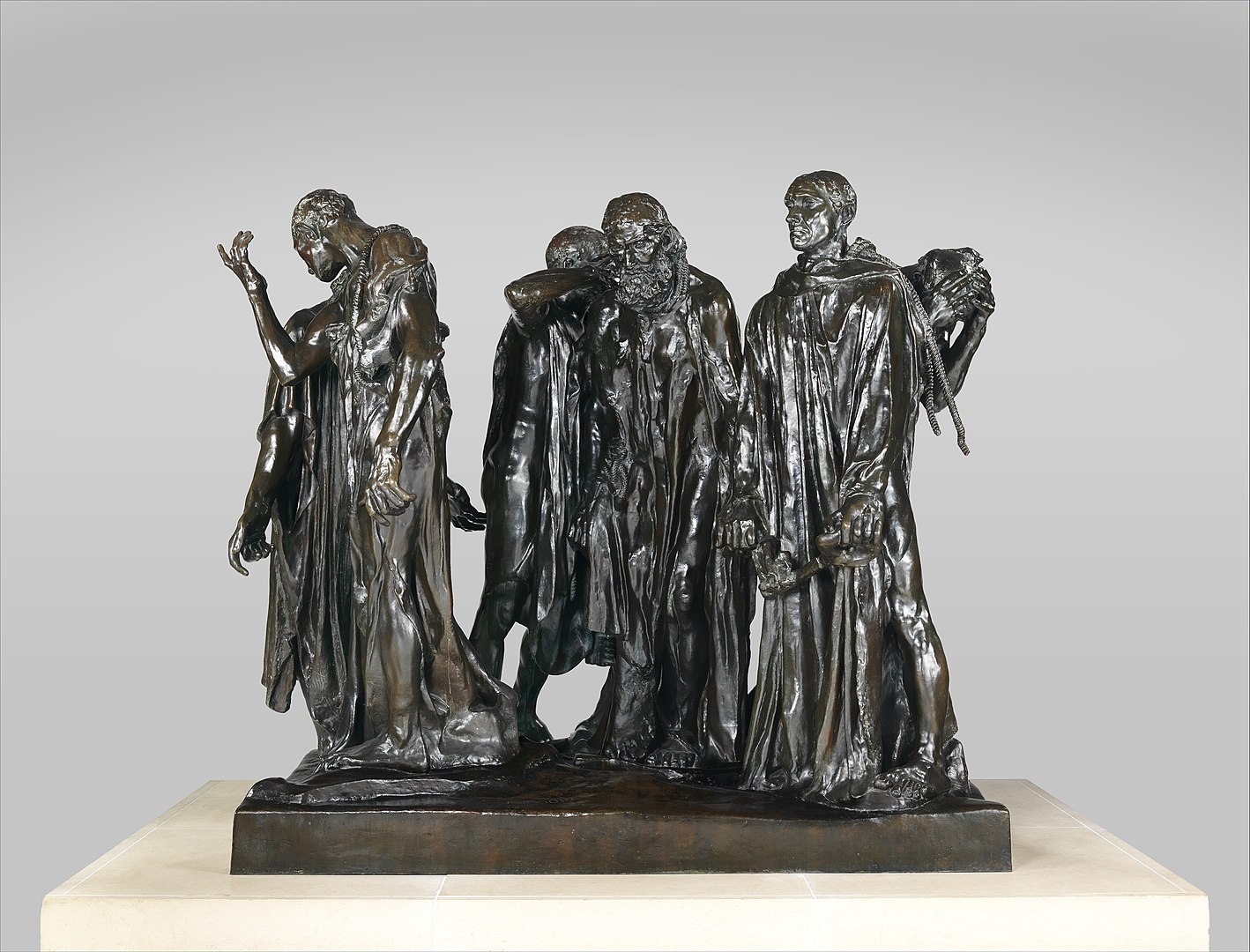 The Burghers at the Metropolitan Museum of Art, New York

For what it’s worth, I would endorse Ms Riddoch’s general point about there being a lack of female effigies in Edinburgh’s streets and squares. My personal vote would go to a group in the manner of Rodin’s ‘Burghers of Calais’ depicting the ‘Edinburgh seven’, that determined band of women who became the first to matriculate in the medical faculty of any British University. Apart from anything else, this would more than double the female total to date. In addition how about Edith Hughes, Britain’s first practising female architect, who certainly deserves a statue in the gardens opposite her Stockbridge birthplace? Or the plucky suffragettes Muriel and Arabella Scott, who endured prison hunger strikes and set fire to Kelso racecourse.

It would also seem to make sense to up the quota of those from diverse ethnic groups who have a place in Edinburgh’s history. During the great hoo-ha over the detaching of the name of David Hume from his George Square tower for the rather stupid indiscretion of a ‘notorious footnote’ in which he stated, without any credible supporting evidence, he was ‘apt to suspect’ that Europeans had contributed more to civilisation than people from Africa, I tried, and failed, to persuade the university principal, Peter Mathieson, that one way to defuse the issue would be to raise funds for a statue to the first (1809) student of African descent to matriculate in Edinburgh, William Fergusson. This could have been placed as a gesture of reproach at the south east corner of George Square Gardens, directly opposite Le Bon David’s eponymous building. Unfortunately the principal chose to enter a minefield by caving in to a petition which had been set up by a Nordic American student from North Carolina, Elizabeth Lund. Fergusson also had a ‘colonialism’ problem as the first governor of African descent of Sierra Leone. Getting these things right is never easy.

Ms Lund had initially suggested the tower should be renamed after Edinburgh alumnus Julius Nyerere, but then she was appraised of the African tyrant’s rampant homophobia and taste for detention without trial, so his name was faded out. In any event, her petition had garnered around 1,800 signatures in a city with around 80,000 students, with many of the signatories not even being on any campus. In normal circumstances it might have been adjudged a colossal failure, though I was informed that around eight individuals of BAME background had made direct representation.

Of course, these are not normal circumstances. Principal Mathieson (whose time at Hong-Kong university was not altogether an unalloyed success according to many in the pro-democracy movement there) perhaps thought dropping the name of a long-dead philosopher from one of the University’s biggest buildings was no big deal. If so, he was wrong. For some dissenters it seemed that a chap from Essex who lives like a Medici at public expense (full remuneration package around £400,000 + free house) seeking to ‘de-Scottify’ his university and capitulating to a student from North Carolina who had assumed a right to preach to Scots on how they should regard their own history was a bit rich, particularly when such revisionism involves an attack on the leading figure in the Scottish Enlightenment. North Carolina, I seem to recall, was also on the slavery-supporting Confederate side in the US Civil War. Just saying.

In a moment of satirical pique your author decided to get in on this petition lark, launching a tongue-in-cheek campaign to expunge forever the name of George Washington, owner of 137 slaves, from the Federal city, and replacing it with that of the Scot from Clackmannanshire who first suggested locating the new US capitol on the banks of the Potomac in The Maryland Journal and Baltimore Gazette on 23rd January 1789 – George Walker. A surprising number of people backed the idea (for reasons of mischief making, one suspects) but unfortunately the new label ‘Walkertown DC’ didn’t seem to appeal to Mayor Muriel Bowser, who failed to act, or even respond.

Admittedly this was all a bit light hearted, but since then matters have moved on, and not in a good way. An extempore body operating under the name ‘Edinburgh Slavery and Colonialism Legacy Review Group’ has, it seems, been given latitude by the city authorities – and especially by Council Leader Adam McVey – to issue virtuous pronouncements on the suitability, or otherwise, of various statues, monuments, plaques, streets, and named buildings in the city, with the right to issue its recommendations where the members of this unaccountable commissariat my feel that a bit of public realm editing may be in order. I have recently filled in its bizarre public consultation survey.

Here’s how it works. Should it be decreed that the India Place address of the Stockbridge Health Centre is offensive, then it could be changed to something neutral, like, say, Buttercup Place. Morningside’s Nile Grove and Canaan Lane, as blatant cultural appropriations, could also be re-consecrated in line with the commissariat’s renaming policy. Clearly urgent action would be required at Harewood Drive, in the council estate of Craigmillar, since this was declared open by the charity minded Mary, Princess Royal and Countess of Harewood, who had married into the Lascelles family, notorious in the 18th century for their sugar plantations. Likewise her son, the 7th Earl of Harewood, who has been described as ‘the best artistic director Edinburgh Festival has ever known’ should probably have his name scratched from the record, though that was largely achieved when he was revealed to have had a child by ‘a lady other than his wife’, in the delicate parlance of the time.

But what is this secret body, who are its serving members, what are their qualifications, how were they appointed, and by whom? It seems that other than its chairman, Professor Sir Geoffrey Palmer, the identities of those attending its closed sessions are not to be revealed, lest nasty troll types resort to making hurtful comments via social media. On the other hand, Sir Geoffrey seems to be a dab hand at lobbing reputational grenades at the likes of journalist and historian Michael Fry, whose ‘mindset’ he found ‘unacceptable’ during discussions on the proposed wording of the plaque now affixed to Henry Dundas’s column, not to mention Professor Emeritus Sir Tom Devine, who, along with Jonathan Hearn, professor of political and sociological history at Edinburgh, was, according to Professor Palmer, part of a ‘biased racist gang.’

So who’s trolling who here? A further, and final, reasoned submission will be arriving soon.