David J Black: Après la déluge – but not so much in Edinburgh

An interesting little conundrum for those with too much time on their hands. The flash floods in Edinburgh’s fashionable Stockbridge area earlier this year did significant damage to property, but thankfully, in contrast to similar events in Germany, no lives were lost. For this we may be grateful to a benign providence, or perhaps just pure luck, though we certainly shouldn’t be complacent.

So here’s a thought to be going on with. There is a great deal of sheltered housing for the elderly and infirm in the area. Given the velocity and depth of the floodwaters, as seen on social media, an elderly person probably wouldn’t have stood much chance if, say, they’d lost their footing at the height of the inundation. In the event of a death, might there have been a liability, and if the answer is in the affirmative, just whose liability could it be? Our councillors, jointly and severally, or their ‘accountable officer’, which would seem to be its CEO? Or maybe someone else altogether, like Rita MacGushie, who should never have washed those tattie peelings down the sink?

A brief recent history of the drains of Stockbridge is essential here. In December 2019 it was announced that Scottish Gas Network was about to embark on a £2.2 million deep excavation along Raeburn Place and its continuations in order to replace its obsolete metal infrastructure with plastic pipes. It was certainly a testimony to the skill and expertise of those concerned that this work was conducted seamlessly over a period of eight months in which, albeit the Hampstead of Scotland looked much like the movie set of Saving Private Ryan, the locals were still able to keep the chip pans frying (though this being EH4, it was probably more likely their seared halloumi skillets.)

The problem with deep excavations is that a massive amount of muck and detritus ends up heaped on the public carriageway, some of it unavoidably finding its way into the street drainage system. One day the residents woke up to discover that, like Brigadoon, the job had been completed and the road surfaces beautifully reinstated while the high-viz squadrons of Scottish Gas Network had gone on to wreak their mayhem somewhere else.

But then a few sharp eyed types noticed that all was not well, in that a number of street drains, known in old Scots parlance as syvers (see Dunfermline Burgh Records, 1500-1501, et passim; origin Old French essavier, a drainage channel) appeared to be clogged up.

As the weeks and months passed, they just seemed to clog up more, and no one was doing anything about it. Not a single syver on Deanhaugh Street, which connects Raeburn Place to the bridge over the Water of Leith, was free flowing. Indeed one on the Craig & Rose side of the street was sprouting so much greenery that all that seemed to be missing was Charlie Dimmock with a few sensible bedding plants.

Then cue a re-run of the Epic of Gilgamesh as a mighty inundation descended upon the Athens of the North, which within a matter of minutes became a Venice in which Raeburn Place, being at one of the lowest points of the city, was transformed into the Canale Grande, but without the gondolas, the iced bellinis, and the Vivaldi.

While it was apparent that the syvers in Raeburn Place were admitting water, it couldn’t really go anywhere since those in Deanhaugh Street were so packed with soil, leaves, and old crisp packets that the outflow to the main culvert under the Water of Leith was almost certainly being impeded. The somewhat predictable result was that the water level in the main street rose, entering commercial and household premises along its length. This now being a designated flood plain, it may be assumed that the next thing to rise horribly will be insurance premiums, although the property values may well be dropping like a stone. Affluence, it seems, had become effluence.

So whose fault was this? A vengeful Deity, furious that Stockbridge folk were having much more fun than was decent, and driven to teaching them a lesson? Probably not. The most fashionable generic excuse is climate change which, when it’s not responsible for causing mass flood events in Edinburgh and Germany is burning down much of Greece and California. Probably yes, but one hears that they’ll be sorting that out in Glasgow in a few weeks. Aye, right, as Lord Kames was wont to pronounce, when sound jurisprudence carried a torch for the Enlightenment.

Perhaps the field could be reduced to a few key players. How about Scottish Gas Network, which was chucking shovelfuls of mud around with gay abandon only 18 months ago? If it was SGN muck clogging the drains doesn’t it bear a smidgen of responsibility? Then, given that water was the issue, we should consider Scottish Water, which being charged with something called ‘the public drainage duty’ is responsible for rainwater run-off from roofs and paved areas. There are snags with this, however, especially with the present practice of Sustainable Urban Drainage Systems (SUDS) being to keep foul water, ie sewage and other nasties, separate from surface water.

Advanced drainage technology is unlikely to have benefited most of pre-war Edinburgh, which didn’t have a grown-up sewage treatment plant until 1978, so Scottish Water may share some responsibility with the roads authority (ie. the City Council) the main outflow being an interceptor sewer which was built below the Water of Leith from 1864, and extended to Balerno in 1889. It’s hardly surprising that local Channel swimmer Ned Barney’s daily dip in the Forth was known as ‘going through the motions’ back in the 1950s.

Even in the 19th century there were certain old-established laws which remained in place, like the 1749 Nastiness Act. This restricted the Gardyloo (or, in Glasgow, ‘Keich-a-boo’) method of waste disposal to between the hours of 10pm and 7am. The fact that the act has never been repealed will no doubt be a matter of much interest and excitement to the antiquarian minded who are still free to chuck the day’s dregs out of the window should they wish to do so, provided they check the hour.

At the present time the applicable and binding statute is the Roads (Scotland) Act 1984 which requires a roads authority to ‘scour, cleanse, and keep open all drains’, something that was manifestly not achieved prior to the great Stockbridge flood. Even if the council was, under this hypothesis, to heap all blame on Scottish Gas Network, it is not thereby absolved from its duty to keep all drains and gulleys clear, though it may proceed against the alleged responsible party for a recovery of costs. There again, where’s the Scottish Environmental Protection Agency when you need it? Rumour has it that it’s meant to be some sort of regulatory authority.

The blame may slosh around a bit, no doubt, what with SUDS, SEPA, Scottish Gas Network, Scottish Water, and Rita MacGushie’s tattie peelings, but when it comes to the chase it’s the local roads authority which is duty bound to keep all drains and gulleys free-flowing.

Its bureaucratic apparatus, it must be said, is anything but simple, what with a scheme of delegated (or maybe not) decision making, and input from many Mikado-like functionaries such as the Head of Strategy and Communications to the CEO, the Senior Information Risk Officer to the Democracy, Governance, and Resilience Senior Manager who also enjoys the services of the Investigation Officer (Community Council Complaints), all overseen by the Leadership Advisory Panel and taken heed of by such important people as the Head of Placemaking. 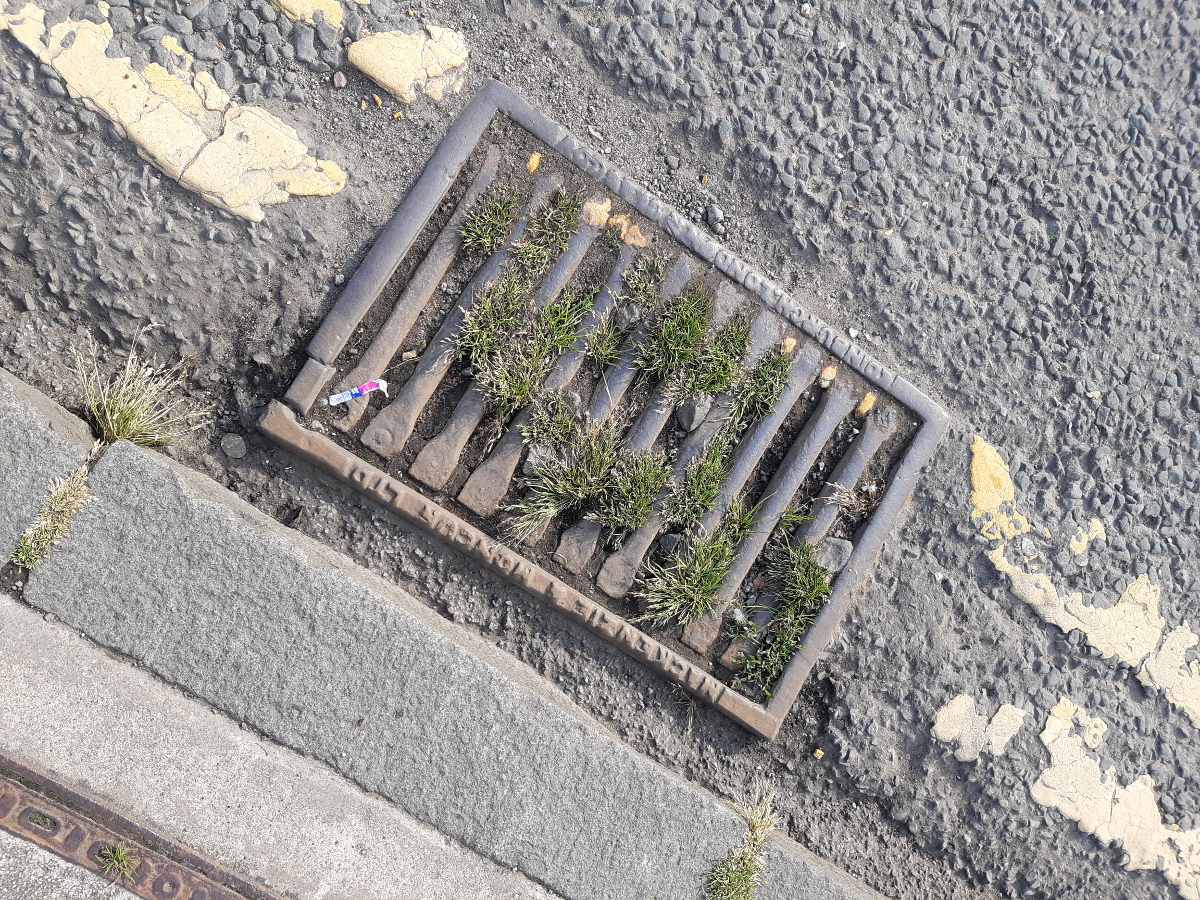 What amazes in this case is that not only did the council ignore its gulley-clearing duties prior to the flood, it followed up this neglectful inaction for more than a month afterwards by doing nothing, exhibit A in this sin of municipal laxness being the August 6 image above of the syver which never did get Ms Dimmock’s bedding plants, the mighty deluge itself having occurred on or around July 4. Steps have since been instituted to rectify matters, thanks to cages being shaken.

Perhaps our council was simply confused, and believed its responsibilities under the Flood Risk Management (Scotland) Act 2009 were meant to be all about encouraging floods, rather than preventing them, in which case they have most wonderfully exceeded all expectations.

Unfortunately, there are those malcontents in the New Town, where not everyone is a law lord or a hedge fund plutocrat, who are beginning to believe that the council’s policy towards their area is a crude manifestation of Foucault’s famous dictum about politics being war by other means.

Could it be that the flooding of Stockbridge is simply part of a dastardly master plan? Having nuked Princes Street with a clever state-subsidised US-style mall in ‘the St James Quarter’ which sucked all retail activity out of Scotland’s most famous shopping boulevard, and having imposed an on-street Trumpton tram system as a pathetic substitute for the brilliant, and much cheaper, metro advocated by Professor Arnold Hendry in 1974, the council Blofelds are now moving north to George Street, where they intend to wreak yet more havoc with a harum-scarum ‘Spaces for People’ concept which seems to have been dreamt up by a group of lycra-clad teenage ‘stakeholders’ in a shed assisted by a few council types with little thought for public consultation.

This bizarre scheme has recently been blasted in a paint-stripper report by the council’s own auditors, but all will be well because they’re going to change the name, Windscale-Sellafied style, to ‘Travelling Safely’, so we can relax, and enjoy the lovely view of their zany Golden T*rd Hotel along the principal axis of what used to be James Craig’s 1767 New Town.

These are not the only foibles being indulged in up in the City Chambers – or that part of it which survives subsequent to the west wing being sold off to a short-term let developer. The perplexing sight of the pavements and original black basalt kerbs in Dundas Street being quite unnecessarily ripped up and replaced with new concrete slabs and imported Chinese granite kerbs will hardly be helping our civic greenhouse gas emissions, surely, while the nice on-street drinking shack they’ve consented to just up the hill on Hanover Street, having reduced two traffic lanes to one, is doing great things for rush hour traffic congestion, obviously.

Meanwhile much venom is poisoning the natter in the post office queue on the subject of the council’s proposed ‘refuse stockades’, these being open structures every 50 or so metres where old mattresses and general filth may be concentrated, and rats and gulls may happily squabble over mouldy pizza crusts, all to make for easier collection of rubbish by a council which some malcontents believe is, if not quite fiscally, at least morally and intellectually, bankrupt. The chances that these horrors will be designed in the neoclassical ‘corrected style’ of the Adam brothers are not high, one hears.