Although there are many cogent reasons for everyone owning the same basic car, this is not the case in reality. The luxury car market is enormous. While for many, a personal contract purchase (PCP) is the only way they can afford a £50,000 car, what if you are in the position to spend £50,000 cash on a car? Should you do just that or go down the PCP route?

Sometimes in life, just because you can does not always mean you should. It will subsequently be shown that someone with £50,000 should not simply spend it on a car because they have the means to do so, but instead be more prudent. It would be more sensible to invest the capital and reap the returns which are sown whilst paying for the car monthly by way of PCP.

In this scenario, where the buyer invests their lump sum and pays monthly premiums from the pot, the investment returns are presumed to be 5.00 per cent per annum. This is based on historical data of a WealthFlow 50:50 Global Portfolio asset allocation. Returns may fluctuate either up or down, but for simplicity 5.00 per cent returns have been presumed for every year. Additionally, please note that the 5.00 per cent returns have been calculated in relation to the lump sum left at the end of the year, not month on month throughout the year. In the example, we start with £50,000, but for year 1’s investment return, it will be a 5.00 per cent increase on £41,000 (£50,000 minus a £3,000 deposit and £6,000 of monthly payments) as that is what is left at the end of Year 1.

Regarding the data on the car, analysis has been based upon averages in the market on cars worth around £50,000 when brand new. The PCP figures on such cars were a £3,000 deposit and then £500 per calendar month. For the rate of devaluation in the cash-buy scenario, historical rates have again been considered and used as indicators. They are not guaranteed rates of devaluation but are reliable indicators based on previous trends.

Please note – throughout this article, any mention of ‘loss’ refers to the amount of the original £50,000 either spent or lost through devaluation.

In the first scenario, it can clearly be seen that the steep rate of devaluation when cash-buying renders the PCP/Investment combination cheaper over a three year period. In the cash-buying example, the car devalues by £15,000 in the first year. By contrast, it has been shown that in the PCP example, there has only been a loss of £15,452 over the whole three year period. The comparison is simple over a three year period. The devaluation in the cash purchase averages at an £8,667 loss per year, whereas the PCP / Investment combination averages a £5,151 loss per year. 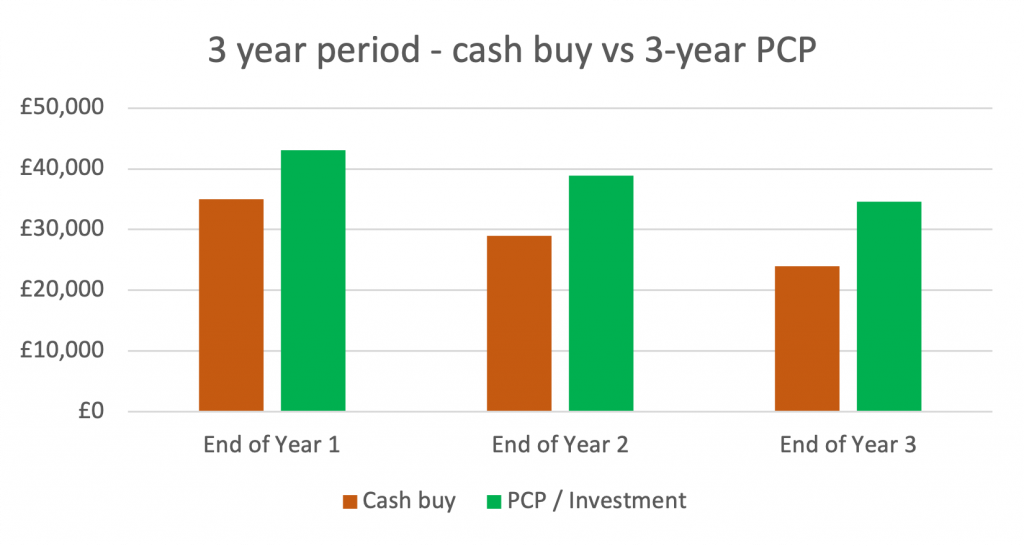 While it is clearly advantageous over an isolated three year period, most people need a car for longer than this. Additionally, most people are keen to have the same standard of car. The next scenario considers a six-year period with a new car at the end of Year 3. The figures are identical to the previous scenario until the end of Year 3. Where the last scenario ended, this is the point where a new car is acquired, as is common in practice.

For the PCP / investment combination, there is no change at the end of Year 3. The car is handed back and acts as the deposit for the new car, and monthly payments continue. If the new car is an equivalent, the new monthly payments will likely be similar. The result is that the rate of decline is very similar to before. There is an initial spend of £9,000 in the first year (deposit and monthly payments) followed by five consecutive years paying £6,000 per annum. Throughout the whole six-year period, whatever is left in the remaining pot reaps investment returns of 5.00 per cent per annum. Consequently, the average annual loss over six years is £4,978 per annum.

However, for the cash-purchase example, things are very different. At the end of Year 3, not only has there been a £26,000 loss, given the devaluation of the car, but to change to an equivalent £50,000 car it costs another £26,000 (with the car acting as a £24,000 trade-in). This additional capital injection will simply be lost again over the next three years as the new car will likely devalue at the same rate as its predecessor. Over a six-year period, there will be three instances of a £26,000 loss (devaluation of the first car, capital injection to purchase the second, and the devaluation of the second car). This equates to a £78,000 loss over six years, averaging an annual loss of £13,000 per annum. The cash-buy option forgoes the opportunity for investment returns to offset the annual loss. Capital is tied up entirely in the car – an asset that devalues as opposed to an investment portfolio which would likely increase year on year. 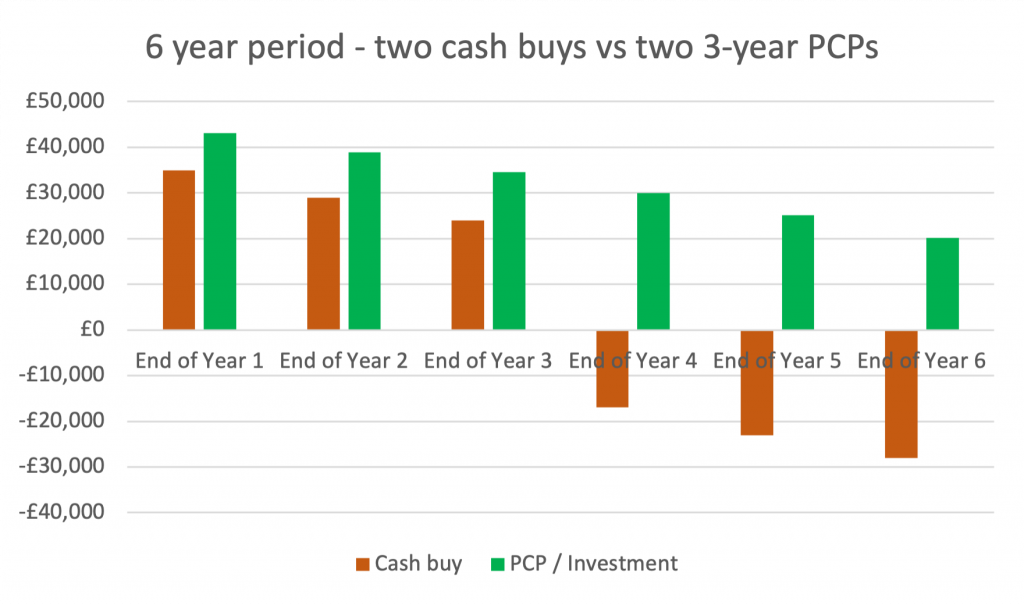 The obvious response to the above scenario is that instead of spending lots of money at the end of Year 3 on buying a new car in the cash-buy scenario, keep the same car for six years to avoid the steepest depreciation that occurs in the first few years of ownership. In this scenario, the PCP / investment combination is identical to the previous scenario.

This is only slightly more than the PCP / investment combination, which averages a loss of £4,978 per annum over six years. While this difference is small enough that some may consider a cash purchase, additional factors render the cash purchase less attractive. 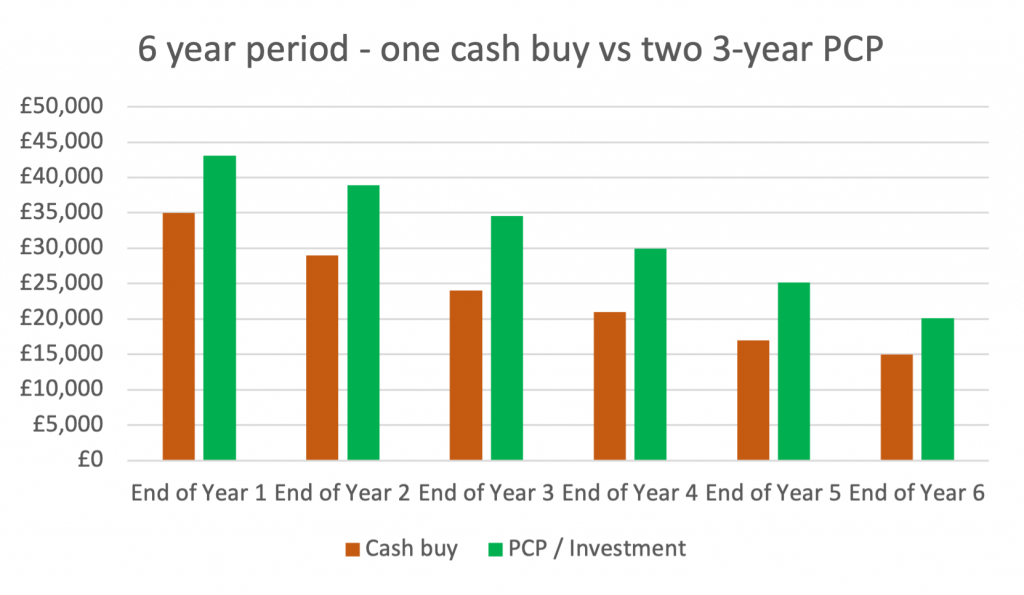 Buying by way of PCP means that you will always be running a car less than three years old. The advantage of this is that it will be under warranty, have fresh tyres, not need an MOT and often come with a service package included in the monthly price. All of these advantages lead to further savings in addition to those that a PCP already offers over a cash-buy.

To conclude, it seems that irrespective of circumstances or timeframes, the PCP and investment combination is the best approach for buying a luxury car. When cash-buying, the capital is tied up entirely in the car, which will continuously devalue. By contrast, capital is invested in the PCP and investment combination, and investment growth helps offset annual payments, resulting in a lesser loss of the original capital year on year. As aforementioned, just because it may be possible to buy a car in cash, it does not always mean it is financially prudent.

Daniel McIntosh is a graduate trainee at Wealthflow