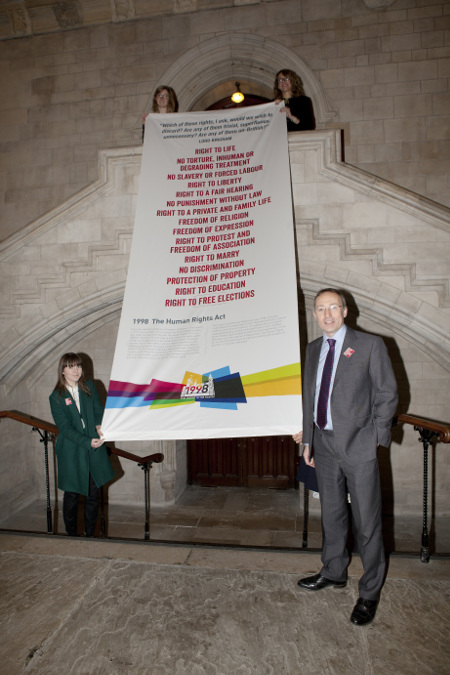 Liberty campaigners yesterday unveiled an 11-foot banner celebrating the Human Rights Act in Westminster Hall, in protest against the act’s omission from a parliamentary exhibition commemorating the 800th anniversary of Magna Carta.

The “Beginnings of that Freedome” exhibition features banners by nine artists celebrating landmark legislation on the UK’s “journey to a modern democracy”. It includes artworks dedicated to the 1807 Abolition of the Slave Trade Act, 1965 Race Relations Act and 1995 Disability Discrimination Act.

However the Human Rights Act – which the current government is seeking to repeal and replace with a “British Bill of Rights and Responsibilities” – is omitted. The act was introduced with cross-party support in 1998, and allows people to defend their fundamental rights – to life, to not be tortured or enslaved, to freedom of religion and expression – in UK courts.

Liberty’s banner – which replicates the design of those in the exhibition – features a list of the fundamental rights protected by the act along with the words of the late Lord Bingham, former Supreme Court President: “Which of these rights, I ask, would we wish to discard? Are any of them trivial, superfluous, unnecessary? Are any of them un-British?”

Mairi Clare Rodgers, head of Campaigns for Liberty, said: “We noticed this embarrassing and glaring omission from Parliament’s otherwise excellent exhibition – so we thought we’d help them out.

“It’s an insult to the great campaigners celebrated – from slavery abolitionists to the Suffragettes – to ignore the Act that encapsulates everything they fought for.

“The Human Rights Act is our most effective tool for holding the powerful to account. It cannot be written out of history on the whim of a handful of politicians who find that fact inconvenient.”